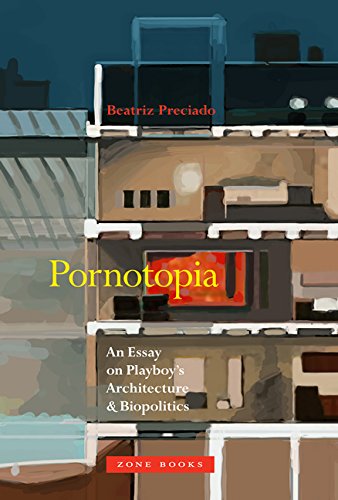 Pornotopia: An Essay on Playboy's Architecture and Biopolitics (Zone Books)

About Pornotopia: An Essay On Playboy's Architecture And

Product description Design objects, bachelor pads, and multimedia rotating beds as expressions of the relationships among architecture, gender, and sexuality. Published for the first time in 1953, Playboy became not only the first pornographic popular magazine in America, but also came to embody an entirely new lifestyle that took place in a series of utopian multimedia spaces, from the fictional Playboy's Penthouse of 1956 to the Playboy Mansion of 1959 and the Playboy Clubs of the 1960s. At the same time, the invention of the contraceptive pill offered access to a biochemical technique able to separate (hetero)sexuality and reproduction, troubling the traditional relationships between gender, sexuality, power, and space. In Pornotopia, Paul Preciado examines popular culture and pornographic spaces as sites of architectural production. Combining historical perspectives with insights from critical theory, gender studies, queer theory, porn studies, and the history of technology, and drawing from a range of primary transdisciplinary sourcestreatises on sexuality, medical and pharmaceutical handbooks, architecture journals, erotic magazines, building manuals, and novels―Preciado traces the strategic relationships among architecture, gender, and sexuality through popular sites related to the production and consumption of pornography: design objects, bachelor pads, and multimedia rotating beds. Largely relegated to the margins of traditional histories of architecture, these sites are not mere spaces but a series of overlapping systems of representation. They are understood here not as inherently or naturally sexual, nor as perverted or queer, but rather as biopolitical techniques for governing sexual reproduction and the production of gender in modernity. Review Compellingly written and funny as well as troubling, Pornotopia is certainly one of the architectural highlights of the year.― Times Higher Education Review Better known as a theoretical provocateur in gender and sexuality studies, Beatriz Preciado's architectural training shines in this fascinating book about the built spaces of Playboy magnate Hugh Hefner's bunny empire, and the cultural fantasies they materialize. Pornotopia is a genre-busting work that implodes traditional distinctions between topics and fields in an entertaining and enlightening fashion. Serious scholars of architecture and culture should have it on their bookshelves next to works by Joel Sanders, Beatriz Colomina, Annmarie Adams, Mark Wigley and Bernard Tschumi.― Susan Stryker, Ph.D. Director, Institute for LGBT Studies, University of Arizona About the Author Paul B. Preciado is a writer, philosopher, curator, and one of the leading thinkers in the study of gender and sexual politics. He is the author of Pornotopia (Zone Books) for which he was awarded the Sade Prize in France, and other books. He lives in Paris and is Associated Philosopher to the Centre Pompidou.

Before
₱ 2,414.00
Pre-order Item
I confirm to purchase this pre-order item.
Other Choices
Return Policy
For more details please visit our page about Cancellations, Returns, and Refunds