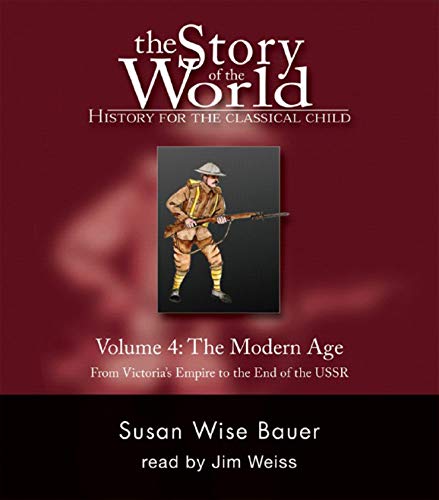 Story of the World, Vol. 4 Audiobook: History for the Classical Child: The Modern Age

Story of the World, Vol. 4 Audiobook: History for Features

About Story Of The World, Vol. 4 Audiobook: History For

Product Description History will never be the same again! This spirited reading of the first in Susan Wise Bauer's Story of the World history series brings to life the stories and records of the peoples of ancient times. Now more than ever, other countries and customs affect our everyday lives-and our children need to learn about the people who live all around the globe. Susan Wise Bauer has provided a captivating guide to the history of the ancient world. Written in an engaging, straightforward manner, The Story of the World weaves world history into a storybook format. This volume covers the major historical events of the years 1850 to the late 1990s, from the reign of England's Queen Victoria to the collapse of the Berlin Wall. This Story of the World audiobook is a collaboration between Jim Weiss, whose voice has been described as “liquid gold” (CNN-TV), and Susan Wise Bauer, whose writing has been described as “timeless and intelligent” ( Publishers Weekly). It may be used along with the print books ( The Story of the World Volume 4 Text Book, Activity Book, and Tests; each sold separately), as a supplement to a traditional history curriculum, or independently. Approximately 12 hours on 11 CDs. Book Description From Victoria's Empire to the End of the USSR About the Author Susan Wise Bauer is a writer, educator, and historian. Her previous books include the Writing With Ease, Writing With Skill, and Story of the World series from Well-Trained Mind Press, as well as The Well-Trained Mind: A Guide to Classical Education at Home, The Well-Educated Mind: A Guide to the Classical Education You Never Had, Rethinking School, The Story of Western Science: From the Writings of Aristotle to the Big Bang Theory, and the History of the World series, all from W. W. W. Norton. She has a Ph.D. in American Studies from the College of William & Mary in Virginia, as well as an M.A. in seventeenth-century literature and a Master of Divinity in Ancient Near Eastern Languages and Literature. For fifteen years, she taught literature and composition at the College of William and Mary. In 1989, Jim Weiss set out on a mission: to record the greatest stories he knew from world literature and history, and inspire families -- especially young listeners -- with a passionate love of the original classics. In the three decades since then, Jim's narration voice and seemingly numberless character voices have formed foundational entertainment and education for millions of listeners around the world. Winning hundreds of awards, Jim’s recordings range on the literary side from fairy tales through stories from Shakespeare, Dickens and Conan Doyle, while his history recordings bring to vivid life major historical events and personalities from the ancient world through the twentieth century. The inspiration for all this began early, with parents and grandparents who told stories and read aloud to him, skills which Jim joyously acquired, and which led him to a degree in Communications and Speech from the University of Wisconsin, Madison. Later, his wife, Randy, earned her own national awards as a teacher and counselor, and their shared passion for learning led to forming their company in 1989, long before the explosion of spoken word recordings made this a "sensible" decision. The recordings began winning listeners and national awards from the first. A few years ago, the Weiss's licensed their recordings and business operations to Well-Trained Mind Press, which has successfully introduced Jim's work into still more markets, while Jim continues to write, record, teach and perform.

The Story Of The World: History For The Classical ...

Before
₱ 2,694.00
Pre-order Item
I confirm to purchase this pre-order item.
Other Choices
Return Policy
For more details please visit our page about Cancellations, Returns, and Refunds