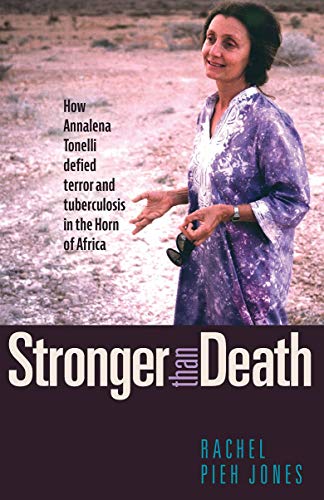 Stronger than Death: How Annalena Tonelli Defied Terror and Tuberculosis in the Horn of Africa

About Stronger Than Death: How Annalena Tonelli Defied

Product Description Think Mother Jones meets Mother Teresa, in Mogadishu.Amid a volatile mix of disease, war, and religious fundamentalism in the Horn of Africa, what difference could one woman make? Annalena Tonelli left behind career, family, and homeland anyway, moving to a remote Muslim village in northern Kenya to live among its outcasts – desert nomads dying of tuberculosis, history’s deadliest disease. “I am nobody,” she always insisted. Yet by the time she was killed for her work three decades later she had not only developed an effective cure for tuberculosis among nomadic peoples but also exposed a massacre, established homes and schools for the deaf, advocated against female genital mutilation, and secured treatment for ostracized AIDS patients. Months after winning the Nansen Refugee Award from the UN in 2003, Annalena Tonelli was assassinated at one of the tuberculosis hospitals she founded. Rachel Pieh Jones, an American writer, was living a few doors down, having moved to Somaliland with her husband and two children just months before. Annalena’s death would alter the course of her life. No one who encounters Annalena in these pages will leave unchanged. Her confounding, larger-than-life example challenges our assumptions about aid and development, Christian–Muslim relations, and what it means to put one’s faith into practice. Brought vividly back to life through Jones’s meticulous reporting and her own letters, Annalena presents us with a new measure of success and commitment. But she also leaves us a gift: the secret to overcoming the fear that pervades our society and our hearts – fear of disease and death, fear of terrorism and war, fear of others, and fear of failure. Review Rachel Pieh Jones has given us the unforgettable story of a servant of the sick and poor who demonstrated, to an almost incomprehensible degree, what it means to love the least of these. Few of us will ever come close to Annalena Tonelli’s devotion and bravery. But thanks to this remarkable book, we can be acquainted with one of history’s great and unheralded exemplars, and inspired to give more of ourselves to those without. Tom Krattenmaker, USA Today columnist, author of Confessions of a Secular Jesus Follower A stunning meditation on love and service, this book has given me a new hero: Annalena Tonelli, a woman of faith who crashed through boundaries and dodged bullets in her mission to heal the sick. Author Rachel Pieh Jones has done justice to an extraordinary person, crafting a story every bit as vivid, relentless, and surprising as her subject. Jason Fagone, author of The Woman Who Smashed Codes A meticulously detailed and empathetic work on a woman whose life should not be forgotten. --Mary Harper, BBC World Service, author Getting Somalia Wrong? A searing account of a person, place, deadly disease, unspeakable violence, and, ultimately, faith, love, and sacrifice. --Booklist Gripping . . . Tonelli’s example of humility, asceticism, and loving with abandon will be a revelation to modern Christian readers and will appeal to anyone interested in international aid. --Publishers Weekly A fascinating, powerful and extremely moving true story that needs to be shared with the rest of the world. --Jordan Wylie, author of Citadel and Running For My Life My life has been shaped by the examples of faith heroes: Dorothy Day, Mahatma Gandhi, Martin Luther King Jr., Malcolm X. In this book, Rachel Pieh Jones introduces me to one more – Annalena Tonelli. Her example of immersive, selfless service combined with learning from different traditions should inspire us all. --Eboo Patel, author of Acts of Faith, founder and president, Interfaith Youth Core As well as telling a compelling story with great skill, this absorbing and clear-eyed examination of the work of one of East Africa’s greatest humanitarians, based on her letters and interviews with her closest associates, also highlights the cultural challenges faced by

With The Irregulars In The Transvaal And Zululand:...

Notes From The Hyena's Belly

The Fear: Robert Mugabe And The Martyrdom Of Zimba...

House Of Stone: The True Story Of A Family Divided...

Gandhi, Smuts And Race In The British Empire: Of P...

Before
₱ 2,047.00
Pre-order Item
I confirm to purchase this pre-order item.
Other Choices
Return Policy
For more details please visit our page about Cancellations, Returns, and Refunds