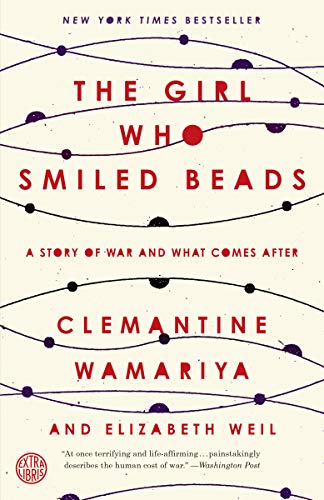 The Girl Who Smiled Beads: A Story of War and What Comes After

About The Girl Who Smiled Beads: A Story Of War And What

Product Description NEW YORK TIMES BESTSELLER • “The plot provided by the universe was filled with starvation, war and rape. I would not—could not—live in that tale.”   Clemantine Wamariya was six years old when her mother and father began to speak in whispers, when neighbors began to disappear, and when she heard the loud, ugly sounds her brother said were thunder. In 1994, she and her fifteen-year-old sister, Claire, fled the Rwandan massacre and spent the next six years migrating through seven African countries, searching for safety—perpetually hungry, imprisoned and abused, enduring and escaping refugee camps, finding unexpected kindness, witnessing inhuman cruelty. They did not know whether their parents were dead or alive.   When Clemantine was twelve, she and her sister were granted refugee status in the United States; there, in Chicago, their lives diverged. Though their bond remained unbreakable, Claire, who had for so long protected and provided for Clemantine, was a single mother struggling to make ends meet, while Clemantine was taken in by a family who raised her as their own. She seemed to live the American dream: attending private school, taking up cheerleading, and, ultimately, graduating from Yale. Yet the years of being treated as less than human, of going hungry and seeing death, could not be erased. She felt at the same time six years old and one hundred years old.   In The Girl Who Smiled Beads, Clemantine provokes us to look beyond the label of “victim” and recognize the power of the imagination to transcend even the most profound injuries and aftershocks. Devastating yet beautiful, and bracingly original, it is a powerful testament to her commitment to constructing a life on her own terms. Review Winner of the 2019 ALA/YALSA Alex AwardA Washington Post Notable Nonfiction Book of 2018A Glamour Best Book of 2018A Kirkus Reviews Best Book of 2018A Real Simple Best Book of 2018 “Sharp, moving . . . Wamariya and her co-author, Elizabeth Weil . . . describe Wamariya’s idyllic early childhood in the Rwandan capital, Kigali, and the madness that followed with an analytic eye and, at times, a lyrical honesty. . . . Wamariya is piercing about her alienation in America and her effort to combat the perception that she is an exotic figure, to be pitied or dismissed. . . . Wamariya tells her own story with feeling, in vivid prose. She has remade herself, as she explains was necessary to do, on her own terms.” —Alexis Okeowo, New York Times Book Review "Like Ishmael Beah’s  A Long Way Gone, on being a boy soldier in Sierra Leone, or Joseph Kim’s  Under the Same Sky, on escaping North Korea, The Girl Who Smiled Beads is at once terrifying and life-affirming. And like those memoirs, it painstakingly describes the human cost of war." —Washington Post “Remarkable . . . Wamariya and the journalist Elizabeth Weil set out to sabotage facile uplift. . . . The fractured form of her own narrative—deftling toggling between her African and American odysseys—gives troubled memory its dark due.” — Ann Hulbert, The Atlantic "Wamariya’s memoir proves how the human spirit can triumph. It truly floored me." —Elisabeth Egan, Glamour "Unforgettable." —People"Gripping . . . It is our human tragedy that there will always be war, and that there will always be displaced people. Memoirs that show exactly what that means, exactly what the toll is, are vital."— The Minneapolis Star Tribune “Wamariya (along with  Outside contributor Elizabeth Weil) tells . . . her story—which, yes, is often extremely tough—with brilliance.” —Outside “Heartbreaking and honest, this important memoir explores the lasting effects that trauma and destruction have on an individual and emphasizes the human ability to overcome it all and build a new future—even when that new life comes with horrors of its own.” — Real Simple “In the aftermath of the Holocaust, witnesses and survivors shared reflections that changed our moral understanding of good and e

Born A Crime: Stories From A South African Childho...

Before
₱ 1,229.00
Pre-order Item
I confirm to purchase this pre-order item.
Other Choices
Return Policy
For more details please visit our page about Cancellations, Returns, and Refunds