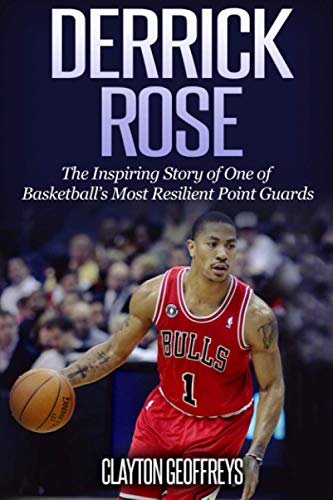 Derrick Rose: The Inspiring Story of One of Basketball’s Most Resilient Point Guards (Basketball Biography Books)

About Derrick Rose: The Inspiring Story Of One Of

Learn the Inspiring Story of the Detroit Pistons' Veteran Guard, Derrick Rose! Read on your PC, Mac, smartphone, tablet or Kindle device! One of many riveting reads in the Basketball Biography Books series by Clayton Geoffreys. Newly revised through his first season with the Pistons, Derrick Rose: The Inspiring Story of One of Basketball’s Most Resilient Point Guards details the journey of one of basketball's premier point guards, Derrick Rose. When he joined the NBA, Derrick Rose reinvigorated the Chicago Bulls franchise, after they went through many years of rebuilding post-Jordan. Derrick Rose's story is one of great resilience and passion for the game a basketball. A quiet but influential superstar, Rose has always been one to let his game do the talking. While Derrick Rose has suffered injuries since his MVP season, these injuries have not deterred him from returning to the game he loves so much. In this book, we'll learn about the triumphs and challenges that make Rose the respectable player he is today. He has come such a long way in proving himself to those who doubted his ability to return from injury. Get this basketball book on Derrick Rose today if you're looking for an inspiring basketball biography book to read, or a gift for a basketball fan! It's perfect for reading at home or on the go. Here is a preview of what is inside this Derrick Rose book: Chapter 1: Early Life and Childhood Chapter 2: High School Years Chapter 3: College Career Chapter 4: NBA Career - Getting Drafted, ROY, Rise to All-Star Status, the MVP Season and more Chapter 5: Personal Life Chapter 6: Rose's Legacy and Future An excerpt from this biography book on Derrick Rose's story: Only an elite group of players in the history of the NBA have won the Most Valuable Player Award. Winning the award means that the player has transcended past everyone else in the NBA during that season, elevating not only themselves but also the status of their team. It is the pinnacle of individual success and talent in the league. There have been truly outstanding players who have reached that peak multiple times in their careers, such as Kareem Abdul-Jabbar, Michael Jordan, and LeBron James. But while those players may boast that they won the achievement more than anyone in league history, none of those MVPs won the award when they were as young as Derrick Rose was when he received his. At age 22 in 2011, Derrick Rose was the youngest Most Valuable Player in the league’s history. The MVP not only signifies that the player has reached a transcendent level above everyone else but it also means that the player brought his team to a height of success that they would not have achieved had it not been for his presence. What this meant for D-Rose was that not only did he become the best player in the league when he won the award but he also led his team, the Chicago Bulls, beyond what they would have been capable of without him. Standing nearly 6’3” and weighing 190 pounds, Derrick Rose was always a massive point guard. His size at the one position was not his best asset, however. The best part about D-Rose from a physical standpoint was always his athletic ability. Coming into the NBA, Rose was one of the fastest players in the world. But he was not recklessly fast—Derrick was always in full control of his speed and quickness. Did you enjoy this excerpt? If so, be sure to pick up a copy of this basketball biography book on Derrick Rose today! This is just one of many basketball biographies by Clayton Geoffreys. Also, be sure to check out Clayton's biography on Jimmy Butler you finish this one.

₱ 605.00
Pre-order Item
I confirm to purchase this pre-order item.
Other Choices
Return Policy
For more details please visit our page about Cancellations, Returns, and Refunds