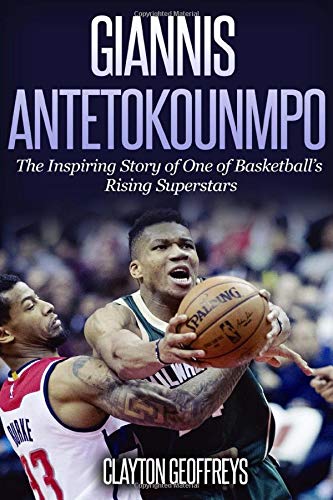 About Giannis Antetokounmpo: The Inspiring Story Of One

Product Description Learn the Inspiring Story of the Milwaukee Bucks' Superstar and MVP, Giannis Antetokounmpo! Read on your PC, Mac, smartphone, tablet or Kindle device! One of many riveting reads in the Basketball Biography Books series by Clayton Geoffreys. Newly revised for the start of the 2019-2020 NBA season, in Giannis Antetokounmpo: The Inspiring Story of One of Basketball's Rising Superstars, you will learn the inspirational story of one of basketball's most promising young stars, Giannis Antetokounmpo. Often nicknamed "The Greek Freak", Giannis Antetokounmpo has quickly emerged as one of the most unique players in the league today. His incredible wingspan and athleticism have made him a dominant presence on both the offensive and defensive ends of the basketball court. He is easily one of the most difficult defensive assignments for opposing teams due to his ability to not only start as a forward, but also as a guard. In just six years, Giannis Antetokounmpo has gone from averaging 6.8 points per game to 27.7 points per game. He has also quickly become the face of the Milwaukee Bucks franchise and the league MVP. There is still much to be unveiled in the career of Giannis Antetokounmpo. At the time of this writing, Giannis is just twenty-four years old. In this book, we'll learn more about The Greek Freak's journey into the NBA, his impact on the game, and his growing legacy as one of the best up and coming stars to make his presence known in basketball. Pick up a copy of this basketball chapter book today. It's one of many basketball books written by multi-time Amazon best-selling author, Clayton Geoffreys. Here is a preview of what is inside this Giannis Antetokounmpo biography book: Childhood and Early Life NBA Career: Getting Drafted, Rookie Season, Working Under Jason Kidd, The Largest Point Guard in the League, and Becoming an All-Star Reaching Elite Superstar Status, The Dunking Machine, MVP Season International Career Personal Life Giannis Antetokounmpo's Player Profile and Impact on Basketball Antetokounmpo's Future An excerpt from this Giannis Antetokounmpo biography: The NBA loves rags to riches stories about how a person that lived and grew up in poverty worked to get to the league, not only as an ordinary player, but as a superstar ranking among the best in the world. These are the stories that make people adore the player and what he has been through to get to the top. More importantly, these are the stories that inspire young children to work just as hard, if not harder, than their idol to reach the success that they aspire to achieve. Several of the greatest players in league history have had to endure poverty before they found success in the NBA. Allen Iverson barely had a home growing up before he starred at Georgetown. In his MVP speech back in 2014, Kevin Durant said that his mother raised him and his brother alone while the family moved from roof to roof. The same was true for LeBron James, who was raised alone by his mother when she was only 16 years old. These players not only earned millions as NBA superstars but have also become fan favorites because of how they worked their way up to get to the league. Tags: Giannis Antetokounmpo Bio, Giannis Antetokounmpo basketball, Milwaukee Bucks basketball, Khris Middleton, Jason Kidd, Kristaps Porzingis, Kyle Lowry, Jabari Parker, Matthew Dellavedova, Russell Westbrook, Kawhi Leonard, Anthony Davis, Kevin Durant, Thon Maker About the Author Clayton Geoffreys is a multi-time best-selling author on Amazon. He was born and raised in Norwalk, Connecticut. Growing up, Clayton could often be found spending afternoons reading in the local public library about management techniques and leadership styles, along with overall outlooks towards life. It was from spending those afternoons reading about how others have led productive lives that Clayton was inspired to write books. Usually Clayton write works around sports to learn more about influential a

Kobe Bryant: The Inspiring Story Of One Of Basketb...

Stephen Curry: The Inspiring Story Of One Of Baske...