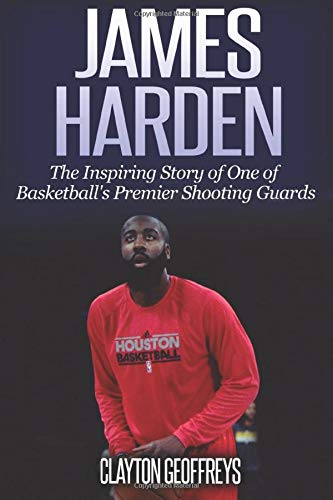 About James Harden: The Inspiring Story Of One Of

Learn the Inspiring Story of the Houston Rockets' Superstar, James Harden! Read on your PC, Mac, smartphone, tablet or Kindle device! One of many riveting reads in the Basketball Biography Books series by Clayton Geoffreys. Newly updated through the midpoint of the 2019-2020 season, James Harden: The Inspiring Story of One of Basketball's Premier Shooting Guards explores the inspirational story of one of basketball's premier shooting guards James Harden. Harden has made a splash playing in the National Basketball Association for the Houston Rockets. In this new edition, we will learn about how James became the star shooting guard that he is today, as well as relive his memorable 2018 MVP season. Starting first with a look into his childhood and early life, we'll learn about James Harden prior to entering the NBA, along with his time in the NBA as a sixth man for the Oklahoma City Thunder behind Russell Westbrook and Kevin Durant to his time leading the Houston Rockets and reunion with Russell Westbrook. James Harden has established himself as one of the top five shooting guards in the game today, alongside legends like Kobe Bryant. Harden has played so exceptionally well that he was recognized as league MVP in 2018. For a man who once was just another college basketball player for the Arizona State Sun Devils, James Harden has come a long way in his basketball career. James Harden has revitalized and ignited a fire in Houston leading the Rockets. The James Harden trade from Oklahoma City may go down as one of the biggest mistakes by the Thunder organization of the recent era. While Harden still has areas to improve upon on the defensive end, his offensive abilities have been lauded around the league. Pick up this unauthorized basketball biography today to learn the inspiring story behind All-Star, James Harden! This is the perfect basketball chapter book for sports fans of all ages. This basketball book explores what makes James Harden great, and what we can learn from his hard work. Here is a preview of what is inside this James Harden book: Childhood and Early Life High School Years College Years at Arizona State The Start of Harden's NBA Career in OKC A Star in Houston Harden's International Experience Harden's Personal Life Impact on Basketball Harden's Legacy and Future An excerpt from this James Harden biography: When you talk about the greatest guards in the history of the NBA, names such as Michael Jordan, Kobe Bryant, Dwyane Wade, and Clyde Drexler come to mind. Those players all had the right combination of skill, athleticism, popularity, charisma, and the will to win that made them successful superstars in their eras. In essence, those great shooting guards have all become unique players—the likes of which could probably never be duplicated in the history of the league. Uniqueness has always been what describes the best shooting guards in league history. Their distinctive set of skills has been one of the catalysts to how the league grows and changes. And because the greatest shooting guards in league history are so unique, the position has become arguably the most difficult to play at the highest level. As difficult a task as it is to become a great shooting guard because of how much the position demands that a player try to match their skills with that of the all-time greats, even tradition yields to how the game changes with the passage of time. Jordan, Bryant, Wade, and Drexler are no doubt all great and unique. However, no other shooting guard in the NBA is as unique as James Harden. Hope you liked this excerpt! If you did, be sure to pick up a copy of this James Harden bio today.

Kyrie Irving: The Inspiring Story Of One Of Basket...