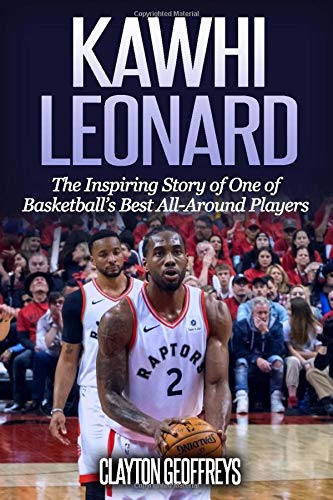 About Kawhi Leonard: The Inspiring Story Of One Of

Learn the Incredible Story of the Los Angeles Clippers' Superstar Kawhi Leonard! Read on your PC, Mac, smartphone, tablet or Kindle device! One of many riveting reads in the Basketball Biography Books series by Clayton Geoffreys. Newly revised for the start of the 2019-2020 season, Kawhi Leonard: The Inspiring Story of One of Basketball's Best All-Around Players details the inspirational story of one of basketball's premier small forwards, Kawhi Leonard. Since entering the league in the the mid first-round of the 2011 NBA Draft, Kawhi Leonard has quickly emerged as one of the most promising and dominant two-way players in the league today. At 22, Leonard demonstrated his maturity and poise on the court as he made key contributions to the Spurs' 2014 Championship run. The league rewarded him for his performance by recognizing him as the 2014 Finals MVP, making him the third-youngest player to ever win the award. Since the initial edition of this book, Tim Duncan and Manu Ginobili have retired from basketball. With these shifts and a setback season due to injury, Kawhi and the Spurs parted ways. In his single season as a member of the Toronto Raptors, Kawhi Leonard built to his legacy by leading the franchise to their first ever championship. Then, in the 2019 offseason, Leonard teamed up with Paul George to begin a new chapter back home as a member of the Los Angeles Clippers. Pick up a copy of this basketball chapter book today. It's perfect for basketball lovers of all ages and great as a weekend read. Here is a preview of what is inside this Kawhi Leonard biography book: Childhood and Early Years High School Career Kawhi's College Career Kawhi Leonard’s NBA Career Getting Drafted Rookie Season First Trip to the NBA Finals Winning the NBA Championship, Finals MVP Winning the Defensive Player of the Year Award Enter LaMarcus Aldridge, First All-Star Season Post-Duncan Era, the Rise to Superstardom The Injury Season The Trade to Toronto Winning His Second NBA Championship The Move to LA Kawhi Leonard’s Personal Life Kawhi Leonard’s Legacy and Future An excerpt from this Kawhi Leonard biography: In the NBA, talent and personality make a superstar. Some of these superstars display unordinary talent at a young age while there are also those whose personalities exceed the technical skill shown on the court. Talent does all of the hard work on the court, but a player's character and demeanor on and off of it are what define his future as a superstar. There are those that showed potential as superstars but ultimately failed because they lacked the personality, character, and demeanor to become great. However, there are those NBA players that have never shown superstar talent or even the potential for joining the league at an early age yet have the personality and demeanor of one destined for greatness. These are the silent workers and discreet assassins that bide their time under the radar without making noise that draws attention. Additionally, there are the players that may resemble background players because of their demeanor and lack of star-quality personality, but they have the work ethic and desire to become great. Though they are not as big as players like Shaquille O'Neal, Michael Jordan, or LeBron James when it comes to their personalities, these silent assassins are just as talented and impactful as any other significant player in league history. Tags: kawhi leonard bio, kawhi leonard story, kawhi leonard basketball, tim duncan, tony parker, manu ginobili, danny green, gregg popovich, paul george

Paul George: The Inspiring Story Of One Of Basketb...