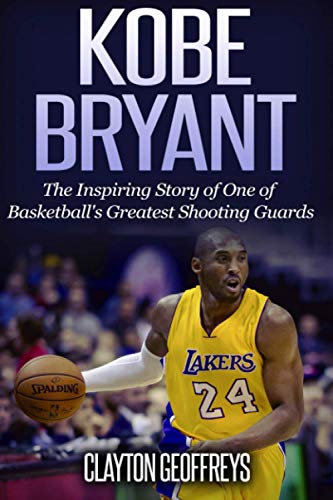 About Kobe Bryant: The Inspiring Story Of One Of

Learn the Inspiring Story of the Los Angeles Lakers' Legendary Guard, Kobe Bryant! Read on your PC, Mac, smartphone, tablet or Kindle device! One of many riveting reads in the Basketball Biography Books series by Clayton Geoffreys. Newly revised in 2020, Kobe Bryant: The Inspiring Story of One of Basketball's Greatest Shooting Guards details the inspirational story of basketball's star, Kobe Bryant. Kobe Bryant was the face of the Lakers dynasty for two decades and for good reason. Few players have commanded a basketball court as much as Kobe in historical performances such as his notable 81-point performance in just under 42 minutes of playing time in 2006 against the Toronto Raptors. Kobe had an illustrious career, and lived an incredible life. Few players will ever be able to reach Kobe Bryant's level in terms of competitive fire and will to win. His polarizing figure defined him and made even those who did not like him at the very least respect him. Read on to learn about the days of when Kobe played alongside Shaquille O’Neal, Robert Horry, Metta World Peace, Derek Fisher, and Pau Gasol in some of the greatest times of Los Angeles Lakers’ basketball history. Get this basketball book on Kobe Bryant today if you're looking for an inspiring basketball biography book to read, or a gift for a basketball fan! It's perfect for reading at home or on the go. Here is a preview of what is inside this Kobe Bryant book: Chapter 1: Childhood and Early Life Chapter 2: High School Years Chapter 3: Kobe’s NBA Career – The Early Years Chapter 4: The Laker Dynasty Chapter 5: Falling Out of the Kobe-Shaq Tandem Chapter 6: The Down Years Chapter 7: Bryant’s Return to Glory Chapter 8: Chasing MJ Chapter 9: The Injury Years and Retirement Chapter 10: International Dominance Chapter 11: Bryant’s Personal Life and Tragic Passing Chapter 12: Impact on Basketball Chapter 13: Kobe Bryant’s Legacy An excerpt from this biography book on Kobe Bryant's story: When Lakers superstar Kobe Bryant gave himself the nickname Black Mamba, everyone wondered why he chose to liken himself to a reptile. The black mamba is one of the fastest and deadliest snakes in the world. It is also the codename used by Uma Thurman's assassin character in the Quentin Tarantino film Kill Bill. And yes, Black Mamba was also the boxing nickname given to Floyd Mayweather Jr.'s uncle, Roger Mayweather. You may be thinking that Bryant probably did not want to become a part of the Mayweather family, so it must have been that Tarantino movie that got to him. Well, it turns out that Bryant did, in fact, watch Kill Bill and was so intrigued by the codename Black Mamba that he did a bit of research on the snake. Upon reading up on the mamba, Bryant decided that it was the perfect description of how he wanted his game to be. The black mamba is said to have a 99% striking accuracy at high speeds and in rapid succession. Bryant stated that it is the kind of surgical precision that he wanted in his game. Kobe Bryant was always known as a perfectionist and player who, despite being great, still strove to be the greatest. And, like the black mamba, Kobe Bryant could strike with precision and without warning. Moreover, he was big, strong, and deadly on the floor both in his prime years as well as when he was a young man. Did you enjoy this excerpt? If so, be sure to pick up a copy of this basketball biography book on Kobe Bryant today! This is just one of many basketball biographies by Clayton Geoffreys. Also, be sure to check out Clayton's biography on other All-Stars after you finish this one.

Michael Jordan: The Inspiring Story Of One Of Bask...