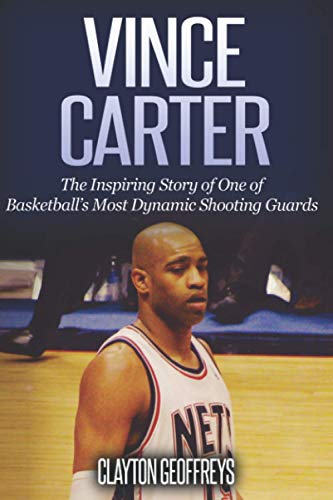 Vince Carter: The Inspiring Story of One of Basketball's Most Dynamic Shooting Guards (Basketball Biography Books)

About Vince Carter: The Inspiring Story Of One Of

Learn the Incredible Story of the Atlanta Hawks' Basketball Superstar Vince Carter! Read on your PC, Mac, smartphone, tablet or Kindle device! One of many riveting reads in the Basketball Biography Books series. In Vince Carter: The Inspiring Story of One of Basketball's Most Dynamic Shooting Guards, you'll read about the inspirational story of basketball's premier shooting guard, Vince Carter. Vince Carter put the Toronto Raptors franchise on the map starting in the late 1990s and into the early 2000s. In an age filled with greats like Shaq, Kobe Bryant, Tracy McGrady, and Steve Nash, Carter has played in one of the most exciting eras of modern basketball. The Toronto Raptors had quite a few deep playoff runs during Vince Carter’s time with them, and have just started recovering from his absence years later behind the leadership of DeMar DeRozan and Kyle Lowry. After stints with a number of teams, Vinsanity found himself a member of the Atlanta Hawks. At the beginning of the 2019-2020 season, Vince Carter announced that this season would be his last, soon making him the record-holder for NBA seasons, with 22 seasons under his belt. If you're looking for a great basketball book to read or to gift to a basketball fan, pick up your copy of Vince Carter: The Inspiring Story of One of Basketball's Most Dynamic Shooting Guards today! Here is a preview of what is inside this Vince Carter biography book: Early Life and Childhood College Years at North Carolina Vince’s NBA Career Vince Carter’s Personal Life Impact on Basketball and Beyond Carter’s Legacy An excerpt from this Vince Carter biography: Vince Carter is the greatest dunker of all time. The 2000 Dunk Contest. That dunk over 7-foot Frenchman Frederic Weis. When people talk about Vince Carter, they talk about his dunks. How he wowed fans across the world. How he made highlight reel after highlight reel. How every aspiring basketball player dreamed of dunking like Carter. While everyone used to want to emulate Michael Jordan’s high-flying dunks, Vince took that to another level. Now, he has become the benchmark for dunking, and he’s widely regarded as the best dunker in the history of the league.And that acclamation is insulting to Vince Carter. What people have forgotten about Vince Carter is that he was not just a dunker. James White, who played 67 games in the NBA, was just a dunker. Shannon Brown, who once nearly jumped over a 6’6” guard in the middle of a playoff game, was just a dunker. Jeremy Evans was just a dunker. Gerald Green, though a reliable wing scorer, is widely regarded as simply a dunker. Vince Carter was not just a dunker. VC was one of the best players in the NBA at his height. At the wing position, he even contended with the likes of Kobe Bryant and Tracy McGrady for the best at that spot. He brought basketball to Canada and the young Toronto Raptors. In his third season in the NBA, he arguably outdueled league MVP Allen Iverson in one of the greatest playoff series in NBA history. Vince was an all-around player who could score from anywhere, pass well for a scoring guard, and led the Toronto Raptors to multiple playoff berths almost entirely by himself. As his moniker suggests, Vince Carter was half man, half amazing during his prime. And if you look back at his career, you’ll understand why. Did you like this excerpt? Then scroll up and pick up this basketball biography on Vince Carter todayTags: vince carter book, vince carter biography, vince carter bio, basketball books for kids

Tracy McGrady: The Inspiring Story Of One Of Baske...

Allen Iverson: The Inspiring Story Of One Of Baske...

₱ 770.00
Pre-order Item
I confirm to purchase this pre-order item.
Other Choices
Return Policy
For more details please visit our page about Cancellations, Returns, and Refunds