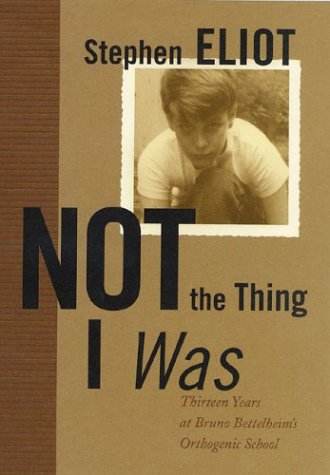 Not the Thing I Was: Thirteen Years at Bruno Bettelheim's Orthogenic School

About Not The Thing I Was: Thirteen Years At Bruno

Product Description He was called crazy. As a child, he probably was. Sent at age eight to Bruno Bettelheim's Orthogenic School among autistics and schizophrenics, Eliot found himself in a world without drugs or locks on the doors. Instead, fine china was on the table. The staff believed to help a child, you had to understand how he saw the world and persuade him that there might be more successful ways to interpret it. Bettelheim had been in the concentration camps. He figured if the Nazis could build an environment to destroy personality, he could build one to create it. A fascinating coming of age story that's a cross between One Flew Over the Cuckoo's Nest and The Ciderhouse Rules. L'Express hailed the author for his "lucidity and devastating humor." Marianne writes, "The child who thought of himself as merely a pulsing brain invites us on a voyage back from the frontier of insanity and we return transformed." A must read for parents, teachers, therapists and troubled adolescents themselves--so that all can see there is light at the end of the tunnel. From Publishers Weekly Eliot's striking memoir chronicles a childhood and adolescence spent within the luxurious confines of the University of Chicago Sonia Shankman Orthogenic school, then run by migr psychiatrist Bruno Bettelheim. In an era when most mental institutions were sterile and unforgiving, Bettelheim's school during Eliot's stint (1963-1976) boasted fine china, classic film screenings, open discussions of sexuality and an unlocked, fully stocked "candy closet" that the children were allowed to raid at will. It's also a place where, according to Eliot, Bettelheim ruled supreme, said nasty things to the kids and publicly slapped them. A concentration camp survivor, "Dr. B." (as both staff and patients called him) passionately believed that "if the Nazis could create an environment to destroy personality... he could build an environment that could foster and re-create personality"-orthogenic means "path to truth" in Greek. And the school's methods are stunningly unorthodox; upon his arrival, eight-year-old Stephen is given a stuffed lion--not, Bettelheim explains, so that he has something to love, but so that he'll have something to hit that can't hit him back. The children, of varying ages, are all there for different reasons; Stephen, a precocious child who could read before he was two, describes them as people with a certain "limp in life," and his own case as involving anxiety and castration fears and borderline schizophrenia. Unfortunately, the memoir shuttles back and forth in time too rapidly-each chapter, ostensibly about a different topic, moves confusingly through the 13 years of Eliot's treatment. A simple year-by-year structure would have made this memoir, which has a real story to tell (and which will inevitably be compared with Girl, Interrupted) more coherent. Copyright 2002 Reed Business Information, Inc. From Library Journal In this unique story of recovery from childhood mental illness, Eliot lucidly recounts his 13 years at the Orthogenic School at the University of Chicago, when the controversial Bruno Bettelheim (1903-90) served as director. Born in Austria and interned in concentration camps, Bettelheim believed in long-term psychoanalytic treatment rather than the drug therapy and behavior modification programs prevalent today. Eliot, who now works as an investment banker in New York City, was sent to the school in 1963 at the age of eight. Just why is unclear, however: the author alludes to unhappiness, lack of friends, and some bizarre thoughts, but that does not seem to account for his diagnosis as a schizophrenic in a transitional phase. Eliot instead focuses on the details of daily life at the school, covering Bettelheim's foibles as well as his therapeutic genius and offering tales of relationships between students and counselors, visits home to an affluent environment, and his rich fantasy life as a troubled boy with gen

A Song For Mary: An Irish-American Memory

The Glass Castle: A Memoir (No Series)

How To Live, What To Do: Thirteen Ways Of Looking ...

Before
₱ 1,289.00
Pre-order Item
I confirm to purchase this pre-order item.
Other Choices
Return Policy
For more details please visit our page about Cancellations, Returns, and Refunds