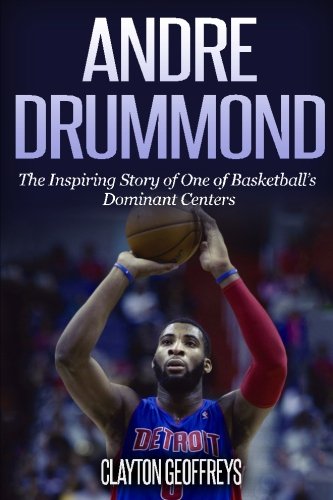 About Andre Drummond: The Inspiring Story Of One Of

Learn the Inspiring Story of the Detroit Pistons’ Star Center Andre Drummond! Read on your PC, Mac, smartphone, tablet or Kindle device! In Andre Drummond: The Inspiring Story of One of Basketball's Dominant Centers, you will learn the inspirational story of one of basketball's premier emerging centers, Andre Drummond. Andre Drummond has played a pivotal role in the reemergence of the Detroit Pistons as a threat in the Eastern Conference under the direction of Stan Van Gundy. While still a young center in the league, Andre Drummond has already established himself as a dominant big man in the paint, who often commands the attention of double teams and opposing defenses to prevent him from scoring easy buckets. In this unauthorized biography, you'll learn Drummond's inspirational story into the league. Here is a preview of what is inside this book: Childhood and Early Life High School Career College Career NBA Career: Getting Drafted, Rookie Season Andre Drummond, the Double-Double Machine, All-Star Season Playoff Debut, Continued Growth Andre Drummond's Personal Life Drummond's Impact and Legacy An excerpt from the book: The traditional center has become a lost position in today’s era of the NBA. In the past, centers such as Wilt Chamberlain, Kareem Abdul-Jabbar, Moses Malone, David Robinson, and Shaquille O’Neal, among others, have lorded the paint to score inside points, rebound misses, and block shots. Championship teams almost always needed those type of centers to win titles. But in today’s game, the center has become a thing of the past. While rebounding the ball and defending the paint are still within their job descriptions, centers have evolved into frontcourt players that specialize in stretching the floor, hitting outside shots, and even defending guards on switches. You would rarely see centers looming inside the paint waiting for passes at the post or drop passes whenever guards drove into the key. The faster pace and reliance on the three-pointer of today’s era have rendered the traditional center an endangered species. Nevertheless, a few players in today’s game still play like the giants of old. They still take advantage of their size and strength at the post and inside the paint. They still rebound buckets at a dozen or more. And they still loom inside the key to block shots or intimidate smaller opponents. One such player goes by the name of Andre Drummond. At 6’11” and sporting an enormous muscular frame, Andre Drummond is the prototypical traditional center. He has both the height and strength to punish smaller defenders in the paint as well as the athleticism and explosiveness to finish strong at the basket. In line with his physical attributes, he reminds the world of how great of a rebounder Moses Malone was back in the day. Drummond uses his massive frame to get inside position and box opposing players out to get rebounds in bunches. Ever since he became a starter in the league, Andre Drummond never averaged below 13 rebounds a game and has been a double-double machine for as long as he has been in the league. Tags: Andre Drummond Bio, Andre Drummond basketball, Detroit Pistons basketball, Reggie Jackson, Stan Van Gundy, Anthony Davis, DeAndre Jordan, DeMarcus Cousins, Marcus Morris, Tobias Harris, Hassan Whiteside

Kill 'Em And Leave: Searching For James Brown And ...

Zora And Langston: A Story Of Friendship And Betra...

Getting To Zero: A Doctor And A Diplomat On The Eb...

Finding Chika: A Little Girl, An Earthquake, And T...

The Pact: Three Young Men Make A Promise And Fulfi...

Before
₱ 1,070.00
Pre-order Item
I confirm to purchase this pre-order item.
Other Choices
Return Policy
For more details please visit our page about Cancellations, Returns, and Refunds