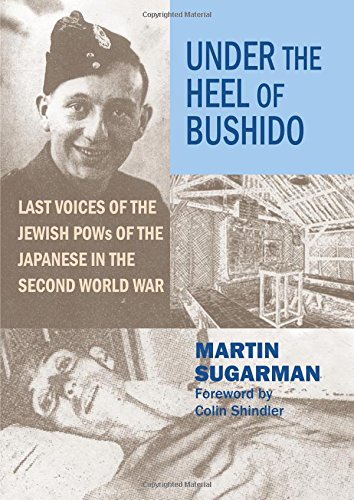 Under the Heel of Bushido: Last Voices of the Jewish POWs of the Japanese in the Second World War

About Under The Heel Of Bushido: Last Voices Of The

Now available in paperback! This book contains dozens of accounts - both horrific and inspiring, amusing and sad - of the experiences of Jewish prisoners of war and internees from Commonwealth and Dutch forces imprisoned by the Japanese during World War II. Along with dozens of photographs from private collections, the material presented is previously unpublished, gathered from personal interviews and archives worldwide. Under the Heel of Bushido is a tribute to the courage and suffering of these men and women of the Jewish community whose experiences have been virtually ignored. The veterans interviewed for the book share painful testimonies, offering a snapshot of the total Jewish involvement, as so many of the 550 or so Jewish prisoners of war who survived their ordeal passed away before they could tell their stories. There was a particular Jewish participation and encounter with the Japanese, and Under the Heel of Bushido chronicles this unique account for the first time. *** "Anti-Semitism was largely absent; the concept - and the Nazis' obsession with Jews - was puzzling to most Japanese, though there were incidents initiated by German liaison officers and Muslim propaganda, and, of course, cruel acts done simply out of spite toward the enermy....In the absence of synagogues and rabbis, many of the Jewish POSs attempted and managed nonetheless to practice accommodated forms of Judaic rituals, including Friday night Sabbath services and, too often, funerals." - The NYMAS Review; StrategyPage, May 2014 *** "Covering Jewish POWs of all ranks, Sugarman shows tensions between POW officers and other ranks/common soldiers, a topic seldom fully covered in POW history. Useful for veterans' organizations, commemoration events, and family history research. Recommended." - Choice, Vol. 51, No. 1, September 2014 *** "Any library that has a reference collection devoted to or has an interest in Jewish servicemen during the Second World War will welcome this effort." - AJL Reviews, September/October 2014 [Subject: Second World War, Military History, Jewish History, Far Eastern Studies]

Geisha Of Gion: The True Story Of Japan's Foremost...

Bridge To The Gods: Tales From Kyushu

Destiny: The Secret Operations Of The Yodogō Exil...

₱ 5,170.00
Pre-order Item
I confirm to purchase this pre-order item.
Other Choices
Return Policy
For more details please visit our page about Cancellations, Returns, and Refunds