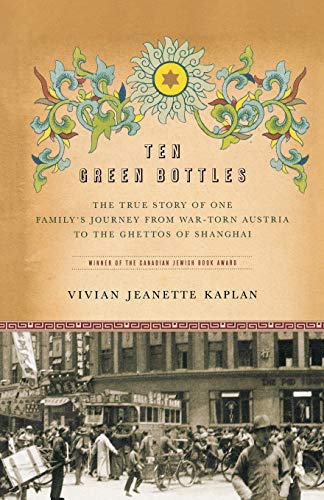 Product Description To Nini Karpel, growing up in Vienna during the 1920s was a romantic confection. Whether schussing down ski slopes or speaking of politics in coffee houses, she cherished the city of her birth. But in the 1930s an undercurrent of conflict and hate began to seize the former imperial capital. This struggle came to a head when Hitler took possession of neighboring Germany. Anti-Semitism, which Nini and her idealistic friends believed was impossible in the socially advanced world of Vienna, became widespread and virulent. The Karpel's Jewish identity suddenly made them foreigners in their own homeland. Tormented, disenfranchised, and with a broken heart, Nini and her family sought refuge in a land seven thousand miles across the world. Shanghai, China, one of the few countries accepting Jewish immigrants, became their new home and refuge. Stepping off the boat, the Karpel family found themselves in a land they could never have imagined. Shanghai presented an incongruent world of immense wealth and privilege for some and poverty for the masses, with opium dens and decadent clubs as well as rampant disease and a raging war between nations. Ten Green Bottles is the story of Nini Karpel's struggles as she told it to her daughter Vivian so many years ago. This true story depicts the fierce perseverance of one family, victims of the forces of evil, who overcame suffering of biblical proportion to survive. It was a time when ordinary people became heroes. Review “Spellbinding . . .evocative . . . remarkable achievement. China experience.....sets this book apart” ―Publisher's Weekly “Riveting . . . moving and memorable” ―Kirkus Reviews “Kaplan's prose is simply stunning . . . Kaplan's descriptions bring wartime Shanghai, its people and smells, to life . . . Although nonfiction, Ten Green Bottles reads like a novel. Kaplan captures the mood and feelings of her mother experiences as if they were her own.” ―Canadian Jewish News “Kaplan writes in the first-person voice of her mother . . . a decision that gives her book an emotional power and vivid immediacy.” ―Maclean's “Her powerful, harrowing story grips the reader. In an odyssey of horrors that takes place over a decade . . . what shines through is the family's indomitable will to survive.” ―Ottawa Citizen About the Author Vivian Jeanette Kaplan was born in Shanghai, where her parents were married. As her family originated in Vienna, her mother tongue is German. When she was two years old, her parents arrived in Canada, settling in Toronto. She graduated from the University of Toronto, where she studied English, French, and Spanish. She is married and has three sons. For a number of years the family owned and ran a lakeside lodge in Muskoka, north of Toronto. For twenty years she had her own business, Vivian Kaplan Oriental Interiors, an import-export firm with interior design showrooms specializing in décor from the Far East. Ten Green Bottles, which tells her own true family saga, is her first book.

Shanghai Refuge: A Memoir Of The World War II Jewi...

₱ 1,731.00
Pre-order Item
I confirm to purchase this pre-order item.
Other Choices
Return Policy
For more details please visit our page about Cancellations, Returns, and Refunds