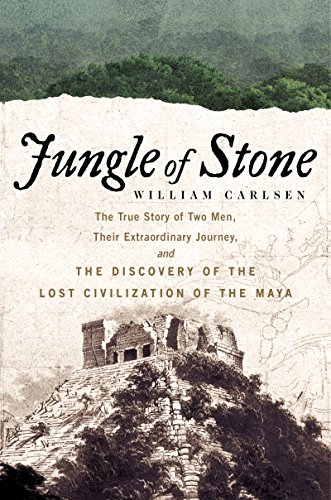 Jungle of Stone: The Extraordinary Journey of John L. Stephens and Frederick Catherwood, and the Discovery of the Lost Civilization of the Maya

About Jungle Of Stone: The Extraordinary Journey Of

The acclaimed chronicle of the discovery of the legendary lost civilization of the Maya. Includes the history of the major Maya sites, including Palenque, Uxmal, Chichen Itza, Tuloom, Copan, and more.NEW YORK TIMES BESTSELLER • Illustrated with a map and more than 100 images. In 1839, rumors of extraordinary yet baffling stone ruins buried within the unmapped jungles of Central America reached two of the world’s most intrepid travelers. Seized by the reports, American diplomat John Lloyd Stephens and British artist Frederick Catherwood—both already celebrated for their adventures in Egypt, the Holy Land, Greece, and Rome—sailed together out of New York Harbor on an expedition into the forbidding rainforests of present-day Honduras, Guatemala, and Mexico. What they found would upend the West’s understanding of human history.In the tradition of Lost City of Z and In the Kingdom of Ice, former San Francisco Chronicle journalist and Pulitzer Prize finalist William Carlsen reveals the remarkable story of the discovery of the ancient Maya. Enduring disease, war, and the torments of nature and terrain, Stephens and Catherwood meticulously uncovered and documented the remains of an astonishing civilization that had flourished in the Americas at the same time as classic Greece and Rome—and had been its rival in art, architecture, and power. Their masterful book about the experience, written by Stephens and illustrated by Catherwood, became a sensation, hailed by Edgar Allan Poe as “perhaps the most interesting book of travel ever published” and recognized today as the birth of American archaeology. Most important, Stephens and Catherwood were the first to grasp the significance of the Maya remains, understanding that their antiquity and sophistication overturned the West’s assumptions about the development of civilization.By the time of the flowering of classical Greece (400 b.c.), the Maya w

In The Shadow Of Perón: Juan Atilio Bramuglia And...

Exposing The Real Che Guevara: And The Useful Idio...

Child Of The Dark: The Diary Of Carolina Maria De ...

The Road To Jonestown: Jim Jones And Peoples Templ...

Before
₱ 1,922.00
Pre-order Item
I confirm to purchase this pre-order item.
Other Choices
Return Policy
For more details please visit our page about Cancellations, Returns, and Refunds