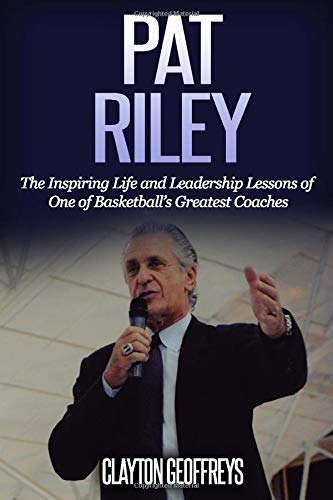 About Pat Riley: The Inspiring Life And Leadership

Learn the Inspiring Story of the Miami Heat's Legendary Coach and Executive Pat Riley! Read on your PC, Mac, smartphone, tablet or Kindle device. Limited time offer: If you buy the print edition, you can keep the Kindle edition for yourself! In Pat Riley: The Inspiring Life and Leadership Lessons of One of Basketball’s Greatest Coaches, you will learn the inspirational story of one of the greatest basketball coaches and executives ever, Pat Riley. Whether it was as a player, coach, or executive, Pat Riley has created a huge legacy for himself with all the franchises he has been a part of. Since 1995, he has led the Miami Heat organization. Needless to say, Riley's adept decision making skills and leadership have enabled him to reach the most elite status when it comes to basketball royalty. Get a copy of this book today to learn what made Pat Riley so great as a coach and as a leader. Here is a preview of what is inside this book: Background Story Riley's NBA Career Pat Riley's NBA Coaching Career What Made Pat Riley a Great Leader The Pat Riley System Key Takeaways: Masterful Motivator, The Will to Adapt and Knowing When to Adapt, and Defense Wins Championships Conclusion and Riley's Legacy An excerpt from the book: What defines the success of an NBA coach? Is it the number of players he helped develop into stars? Is it the consistent level of competitiveness he has helped establish in the franchise? Is it the system or culture he has instilled in the organization? Or is it the legacy of excellence he built and left during his time as a head coach? If you look at it, all of those queries lead to one ultimate question: is a successful NBA coach measured by the championships he has won? Basketball is not merely a team sport. What is visible on the floor is how the players and team play as a unit. But what people do not normally see is what happens off the court and in the team facilities. Teams are built by organizations from the ground up. Everyone in the organization contributes to the success no matter how small their role may be. But if you look at it, the biggest role any person may have to carry is being the coach. The head coach is responsible for bringing the best out of the players, making sure the team stays competitive every season, establishing a winning culture or system, and building a legacy that lasts for generations. All of those things ultimately lead to a team built to win it all. A head coach that manages to do all those things for a team will more than likely lead the squad to a championship. And when it comes to titles, few coaches have won more rings than Pat Riley. In the NBA, where there are a lot of teams that have to contend for a title and coaches are quick to turn over from one to another, it is a difficult task to win a championship. In fact, there have only been 14 coaches that have won multiple championships. Among those 14 people, only five have won at least five titles. Pat Riley is one of them. Tags: Pat Riley Bio, Pat Riley basketball, Miami Heat basketball, Gregg Popovich, Steve Kerr, Phil Jackson, Doc Rivers, Larry Brown, Brad Stevens, Vince Lombardi, Bill Walton, Bob Knight, Kareem Abdul-Jabbar, John Calipari, Mike Krzyzewski, John Wooden, coaching books, basketball coaching, leadership case studies

The Winner Within: A Life Plan For Team Players

₱ 1,429.00
Pre-order Item
I confirm to purchase this pre-order item.
Other Choices
Return Policy
For more details please visit our page about Cancellations, Returns, and Refunds