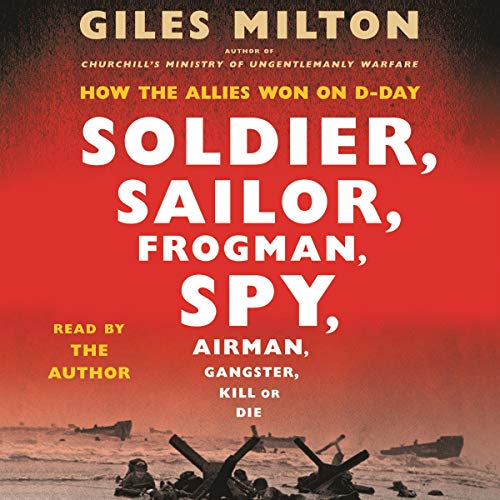 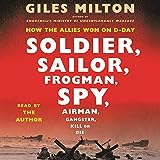 This program is read by the author.  A groundbreaking account of the first 24 hours of the D-Day invasion told by a symphony of incredible accounts of unknown and unheralded members of the Allied - and Axis - forces. Seventy-five years have passed since D-Day, the greatest seaborne invasion in history. The outcome of the Second World War hung in the balance on that chill June morning. If Allied forces succeeded in gaining a foothold in Northern France, the road to victory would be open. But if the Allies could be driven back into the sea, the invasion would be stalled for years, perhaps forever.  An epic battle that involved 156,000 men, 7,000 ships, and 20,000 armored vehicles, the desperate struggle that unfolded on June 6, 1944 was, above all, a story of individual heroics - of men who were driven to keep fighting until the German defenses were smashed and the precarious beachheads secured. This authentic human story - Allied, German, French - has never fully been told.  Giles Milton's bold new history narrates the day's events through the tales of survivors from all sides: the teenage Allied conscript, the crack German defender, the French resistance fighter. From the military architects at Supreme Headquarters to the young schoolboy in the Wehrmacht's bunkers, Soldier, Sailor, Frogman, Spy, Airman, Gangster, Kill or Die lays bare the absolute terror of those trapped in the front line of Operation Overlord. It also gives voice to those who have hitherto remained unheard - the French butcher's daughter, the Panzer Commander's wife, the chauffeur to the General Staff.  This vast canvas of human bravado reveals "the longest day" as never before - less as a masterpiece of strategic planning than a day on which thousands of scared young men found themselves staring death in the face. It is drawn in its entirety from the raw, unvarnished experiences of those who were there.

Survival In The Land Of Dysentery: The World War I...

Abraham's Journal: The Life And Times Of Abraham B...

Custer's Trials: A Life On The Frontier Of A New A...

Crown Of Blood: The Deadly Inheritance Of Lady Jan...

Lady Was A Gambler: True Stories Of Notorious Wome...

Maxims Of Robert E. Lee For Young Gentlemen, The

₱ 1,156.00
Pre-order Item
I confirm to purchase this pre-order item.
Other Choices
Return Policy
For more details please visit our page about Cancellations, Returns, and Refunds