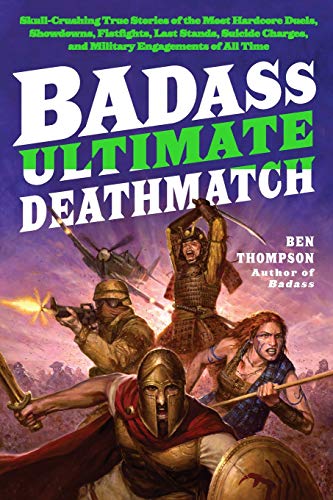 Product Description From the Ben Thompson, author of Badass: The Birth of a Legend, comes a collection of history’s most awe-inspiring duels and showdowns, brutal crusades and epic brawls, and profiles of the fascinating people who fought in them. From Caliphs to Green Berets, some of civilization’s toughest warriors are profiled in Badass: Ultimate Deathmatch, including Cyrus the Great, St. Moses the Black, and The Rani of Jhansi, as well as in-depth analyses of how they battled their way to victory. Featuring original artworks by top graphic artists and comic book illustrators, and Ben Thompson’s signature wry, side-splitting commentary, Badass: Ultimate Deathmatch is the history of badasses, the only way it should be written: covered in blood! From the Back Cover Unstoppable true stories of the most hardcore showdowns, last stands, and military engagements of all time! When only one can live, it's an Ultimate Deathmatch! This ain't no table tennis. You're not here to skip rope with your niece. You're here to witness the catastrophically awesome exploits of history's greatest badasses. Not only that, you're here to see what happens when badasses collide, when glory and doom hang in the balance, when two men enter one man leaves. If you dare listen, you'll hear the stories of . . . Cyrus the GreatThe king who forged the Persian Empire with blood, steel, and a few thousand rampaging camels St. Moses the BlackThe Patron Saint of Asskickings, who taught bandit thugs a lesson in turning the other cheek The War of AracauThe only successful indigenous resistance to Spanish colonization, led by a Mapuche warrior who strapped blades to his arms after the conquistadors sawed off his hands The Rani of JhansiThe Indian warrior princess who took on the British crown with a sword in each hand and her baby strapped to her back Tango Mike-MikeOne lone Green Beret single-handedly rescues an entire Special Forces squad from a pinned-down position deep behind enemy lines in Cambodia The Charge of the Australian Light HorseEight hundred horsemen armed with bayonets embark on the last great cavalry charge in history, rushing toward trenches filled with machine guns, rifles, and huge bullets About the Author Ben Thompson has run the warhammer of a website badassoftheweek.com since 2004, and has written humorous history-related columns for outlets such as Cracked, Fangoria, Penthouse, and the American Mustache Institute. Even though he's never flown a jetpack over the Atlantic Ocean or punched someone so hard that his head exploded, he is considered by many to be the world's foremost expert on badassitude. He is the author of Badass and Badass: The Birth of a Legend.

Badass: A Relentless Onslaught Of The Toughest War...

Before
₱ 1,177.00
Pre-order Item
I confirm to purchase this pre-order item.
Other Choices
Return Policy
For more details please visit our page about Cancellations, Returns, and Refunds