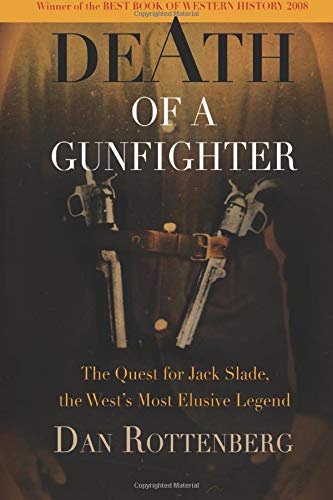 Death of a Gunfighter: The Quest for Jack Slade, the West's Most Elusive Legend

About Death Of A Gunfighter: The Quest For Jack

Product Description The True Story of One of America’s Most Enigmatic and Tragic Heroes Awarded Best Western History Book of 2008 by the Wild West History Association "A superb biography"—Foreword Reviews "An ambitious, well-written effort to restore a Wild West desperado to history.... Readers will surely remember Jack Slade from henceforth. A treat for Western history buffs and fans of true crime."—Kirkus Reviews "An enjoyable read, and it is also a heroic effort."—Wall Street Journal "Every bit the page-turner as Roughing It, with one added advantage—Rottenberg's book approaches the truth."—Wild West magazine "Now and then a book of Western history comes along that captures an era and clears up many a mystery; Death of a Gunfighter is such a book."—Colorado Central magazine In 1859, as the United States careened toward civil war, Washington's only northern link with America's richest state, California, was a stagecoach line operating between Missouri and the Pacific. Yet the stage line was plagued by graft, outlaws, and hostile Indians. At this critical moment, the company enlisted a former wagon train captain and Mexican War veteran to clean up its most dangerous division. Over the next three years, Joseph Alfred "Jack" Slade exceeded his employers' wildest dreams, capturing bandits and horse thieves and driving away gangs; he even shot to death a disruptive employee. He kept the stagecoaches and the U.S. Mail running, and helped launch the Pony Express, all of which kept California in the Union—and without California's gold, the Union would have failed to finance its cause. Across the Great Plains he became known as "The Law West of Kearny." Slade's legend grew when he was shot multiple times and left for dead, only to survive and exact revenge on his would-be killer. But once Slade had restored the peace, leaving him without challenges, his life descended into an alcoholic Dr. Jekyll and Mr. Hyde nightmare, transforming him from a courageous leader, charming gentleman, and devoted husband into a vicious, quick-triggered ruffian—a purported outlaw —who finally lost his life at the hands of vigilantes. Since Slade's death in 1864, persistent myths and stories have defied the efforts of writers and historians, including Mark Twain, to capture the real Jack Slade. Despite his notoriety, the pieces of Slade's fascinating life—including his marriage to the beautiful Maria Virginia—have remained scattered and hidden. He was never photographed and left almost no personal writings, not even a letter. In Death of a Gunfighter: The Quest for Jack Slade, the West's Most Elusive Legend, journalist Dan Rottenberg assembles years of research to reveal the true story of Jack Slade, one of America's greatest tragic heroes. About the Author Dan Rottenberg is a professional writer.

Kingdom Of Fear: Loathsome Secrets Of A Star-Cross...

Irena's Children: The Extraordinary Story Of The W...

Rumi's Secret: The Life Of The Sufi Poet Of Love

Dark Side Of Fortune: Triumph And Scandal In The L...

Before
₱ 2,597.00
Pre-order Item
I confirm to purchase this pre-order item.
Other Choices
Return Policy
For more details please visit our page about Cancellations, Returns, and Refunds