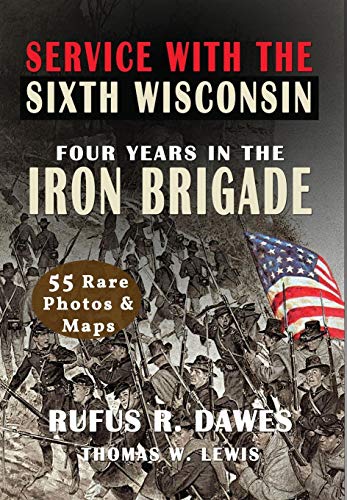 Service With The Sixth Wisconsin (Illustrated): Four Years in the Iron Brigade

About Service With The Sixth Wisconsin

NEW: Fifty-five (55) Illustrations, Notes, Bibliography, Index, and General Rufus R. Dawes' Battle Record! They were fierce! They were tough! The famous Iron Brigade was one of the most celebrated brigades in the history of the Civil War!   But how did they earn their title? Reflecting upon the Battle of South Mountain, General McClellan said, “My Headquarters were where I could see every move of the troops taking the gorge on the Pike. With my glass I saw the men fighting against great odd, when General Hooker came in great haste for some orders. I asked him what troops were those fighting on the Pike. His answer was, ‘General Gibbon’s Brigade of Western men.’ I said, ‘They must be made of iron.’ He replied, ‘By the Eternal they are iron. If you had seen them at Second Bull Run as I did, you would know them to be iron.’ I replied, ‘Why, General Hooker, they fight equal to the best troops in the world.’   Composed originally of the 2nd, 6th, and 7th Wisconsin, 19th Indiana, and Battery B of the 4th U.S. Artillery, and then later reinforced by the 24th Michigan, the famed brigade did not come without experiencing losses. Colonel Fox wrote in a report documenting war casualties: “The Iron Brigade suffered a greater proportionate loss in battle than any other brigade in the Army of the Union.”   Service With the Sixth Wisconsin details first-hand accounts of the bloody campaign of forty-five days, which covers the battles of Gainesville and Bull Run Second under General Pope, and the battles of South Mountain and Antietam, in the Maryland campaign. Dawes and his regiment fought in these and other major battles including Chancellorsville, Gettysburg, Wilderness, Spotsylvania Court House, Cold Harbor and Petersburg.   Includes details about soldiers and military camp life!   Table of Contents:   LIST OF ILLUSTRATIONS.   PREFACE.   CHAPTER I. (Mustered in, Plug Uglies Attack)   CHAPTER II. (The “Iron Brigade” in Embryo)   CHAPTER III. (Fredericks Hall Raid, Battle of Gainesville, Battle of Bull Run Second)   CHAPTER IV. (Battle of South Mountain)   CHAPTER V. (Battle of Fredericksburg, Mud Campaign [Mud March], Northumberland County Raid)   CHAPTER VI. (Rufus R. Dawes reported as killed, Pontoon Boats, Fitz Hugh’s Crossing)   CHAPTER VII. (Camp Near White Oak Church, Expedition Down the Northern Neck, The Battle as Reported to M. B. G.)   CHAPTER VIII. (The Sixth Wisconsin at Gettysburg)   CHAPTER IX. (South of the Rappahannock, Echoes of the Morgan Raid, Friendly Call on the Enemy)   CHAPTER X. (Retreat to Centreville, Skirmish at Haymarket, Adjutant Brooks Captured by Rebels, Mine Run Campaign)   CHAPTER XI. (Kelly’s Ford, Dawes is Married)   CHAPTER XII. (Battle of the Wilderness, “Bloody Angle,” Laurel Hill)   CHAPTER XIII. (Battle of Jericho Ford, Battle of the North Anna, Battle of Bethesda Church, Battle of Cold Harbor)   CHAPTER XIV. (Captain Kellogg in Rebel Prison and His Escape, Trenches Before Petersburg, Mine Explosion)   CHAPTER XV. (Battle on the Weldon Road, Major E. C. Dawes surgery, After Seventeen Years)   Battle Record of Rufus R. Dawes   NOTES   BIBLIOGRAPHY   INDEX

Goldwater: The Man Who Made A Revolution

The White Horse King: The Life Of Alfred The Great

Killing Kennedy: The End Of Camelot

The Maid And The Queen: The Secret History Of Joan...

₱ 1,502.00
Pre-order Item
I confirm to purchase this pre-order item.
Other Choices
Return Policy
For more details please visit our page about Cancellations, Returns, and Refunds