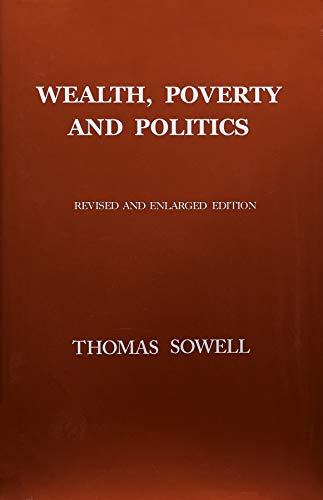 About Wealth, Poverty And Politics

Product Description A revised and enlarged edition of Thomas Sowell's essential examination of differences of wealth and income between nations and within nations Wealth, Poverty and Politics challenges the assumptions, the definitions, the evidence and the reasoning of most of what is said about differences of income and wealth by people in the media, in academia and in politics. After an extensive examination of factors behind the economic differences between nations and within nations -- including geographic, demographic, cultural and political factors -- the last section of the book is a searching critique of leading income redistributionists, from John Rawls to Thomas Piketty and Nobel laureates in economics Paul Krugman, Angus Deaton and Joseph Stiglitz. Among the more heartening findings from history are the individuals, groups and nations that have risen from poverty and backwardness to prosperity and achievements on the frontiers of human progress. Among the more painful findings are counterproductive creeds and policies that have needlessly prolonged poverty and dependency among lagging groups in countries around the world, and whipped up resentments -- and sometimes violence -- against more productive and successful minorities in many places and times. Although Wealth, Poverty and Politics offers many new analyses and insights, it is essentially a fact-based study which subjects many beliefs, from various parts of the ideological spectrum, to the ultimate test of empirical evidence. These challenged beliefs about the causes of economic differences range from genetic determinism to exploitation and discrimination. In each case, the analysis follows where the facts lead, whether that is verification, refutation or some combination of the two. Its guiding principle is expressed in a quotation from the late Daniel Patrick Moynihan that opens the final section of the book: "You're entitled to your own opinions, but you're not entitled to your own facts." Review "Transcending partisanship through a careful examination of data, Wealth, Poverty, and Politics reveals the truth about the most explosive political issue of our time."― Conservative Book Club "A calmly phrased but damning indictment of perhaps the world's most rhetorical blunt political instrument: class hatred."― Washington Times "A true gem in terms of exposing the demagoguery and sheer ignorance of politicians and intellectuals in their claims about wealth and poverty.... Dr. Sowell's new book tosses a monkey wrench into most of the things said about income by politicians, intellectuals and assorted hustlers, plus it's a fun read."― Prof. Walter E. Williams, George Mason University, Townhall "In his latest tome, [Sowell] draws from this well of research to do what he has done so well for so long: question basic assumptions behind public policy and follow the facts where they lead him."― Jason Riley, Wall Street Journal "It's a scandal that economist Thomas Sowell has not been awarded the Nobel Prize. No one alive has turned out so many insightful, richly researched books. His latest is another triumph of crackling observations that underscore the ignorance of our economists and policymakers. His take on how culture, geography, politics and social factors affect how societies progress -- or don't -- will rile those addicted to political correctness but leave everyone else wiser."― Steve Forbes, Forbes Magazine "Sowell has done us a great service by placing our current controversies in international context."― National Review "Sowell's latest book, latest of 52 by my count, contains the kind of acute analysis and fearless commentary his readers have relied on since 1971's Economics: Analysis and Issues... his writing is crystal-clear, free of academic jargon and the kind of specialist clutter that often disfigures the writing of academics.... Most of his books remain in print and repay the time of thoughtful readers, as does Wealth, Poverty, and Politics. Santa

Before
₱ 1,837.00
Pre-order Item
I confirm to purchase this pre-order item.
Other Choices
Return Policy
For more details please visit our page about Cancellations, Returns, and Refunds