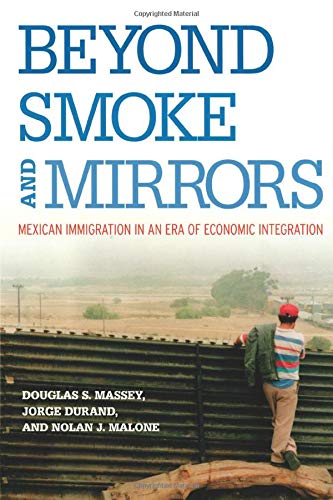 Beyond Smoke and Mirrors: Mexican Immigration in an Era of Economic Integration

About Beyond Smoke And Mirrors: Mexican Immigration In An

Product Description Migration between Mexico and the United States is part of a historical process of increasing North American integration. This process acquired new momentum with the passage of the North American Free Trade Agreement in 1994, which lowered barriers to the movement of goods, capital, services, and information. But rather than include labor in this new regime, the United States continues to resist the integration of the labor markets of the two countries. Instead of easing restrictions on Mexican labor, the United States has militarized its border and adopted restrictive new policies of immigrant disenfranchisement. Beyond Smoke and Mirrors examines the devastating impact of these immigration policies on the social and economic fabric of the Mexico and the United States, and calls for a sweeping reform of the current system. Beyond Smoke and Mirrors shows how U.S. immigration policies enacted between 1986–1996―largely for symbolic domestic political purposes―harm the interests of Mexico, the United States, and the people who migrate between them. The costs have been high. The book documents how the massive expansion of border enforcement has wasted billions of dollars and hundreds of lives, yet has not deterred increasing numbers of undocumented immigrants from heading north. The authors also show how the new policies unleashed a host of unintended consequences: a shift away from seasonal, circular migration toward permanent settlement; the creation of a black market for Mexican labor; the transformation of Mexican immigration from a regional phenomenon into a broad social movement touching every region of the country; and even the lowering of wages for legal U.S. residents. What had been a relatively open and benign labor process before 1986 was transformed into an exploitative underground system of labor coercion, one that lowered wages and working conditions of undocumented migrants, legal immigrants, and American citizens alike. Beyond Smoke and Mirrors offers specific proposals for repairing the damage. Rather than denying the reality of labor migration, the authors recommend regularizing it and working to manage it so as to promote economic development in Mexico, minimize costs and disruptions for the United States, and maximize benefits for all concerned. This book provides an essential "user's manual" for readers seeking a historical, theoretical, and substantive understanding of how U.S. policy on Mexican immigration evolved to its current dysfunctional state, as well as how it might be fixed. Review A significant contribution to a deeper, interdisciplinary analysis of migration flows and policies. -- Millenium: Journal of International Studies, Vol. 31:3 A welcome contribution to the debate on immigration policy -- Latin American Research Review An unmatched overview of the realities of Mexican migration to the United States. -- Development Policy Review, May 2003 Deserves serious attention ... An important contribution to the field of U.S.-Mexico relations. -- Urban Studies, Vol. 40:3 This book raises important questions and forces serious thought. -- Industrial & Labor Relations Review, January 2003 About the Author DOUGLAS S. MASSEY is the Dorothy Swaine Thomas Professor of Sociology at the University of Pennsylvania. JORGE DURAND is professor and investigator in the Department for the Study of Social Movements at the Universidad de Guadalajara. NOLAN J. MALONE is a doctoral candidate in demography at the University of Pennsylvania.