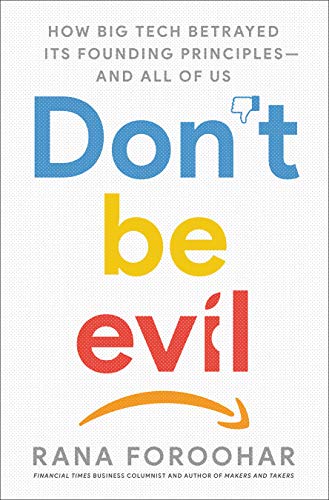 Don't Be Evil: How Big Tech Betrayed Its Founding Principles -- and All of Us

About Don't Be Evil: How Big Tech Betrayed Its Founding

Product Description A penetrating indictment of how today’s largest tech companies are hijacking our data, our livelihoods, our social fabric, and our minds—from an acclaimed Financial Times columnist and CNN analyst    WINNER OF THE PORCHLIGHT BUSINESS BOOK AWARD • NAMED ONE OF THE BEST BOOKS OF THE YEAR BY FOREIGN AFFAIRS AND EVENING STANDARD “Don’t be evil” was enshrined as Google’s original corporate mantra back in its early days, when the company’s cheerful logo still conveyed the utopian vision for a future in which technology would inevitably make the world better, safer, and more prosperous.   Unfortunately, it’s been quite a while since Google, or the majority of the Big Tech companies, lived up to this founding philosophy. Today, the utopia they sought to create is looking more dystopian than ever: from digital surveillance and the loss of privacy to the spreading of misinformation and hate speech to predatory algorithms targeting the weak and vulnerable to products that have been engineered to manipulate our desires.   How did we get here? How did these once-scrappy and idealistic enterprises become rapacious monopolies with the power to corrupt our elections, co-opt all our data, and control the largest single chunk of corporate wealth—while evading all semblance of regulation and taxes?  In  Don’t Be Evil, Financial Times global business columnist Rana Foroohar tells the story of how Big Tech lost its soul—and ate our lunch.   Through her skilled reporting and unparalleled access—won through nearly thirty years covering business and technology—she shows the true extent to which behemoths like Google, Facebook, Apple, and Amazon are monetizing both our data and our attention, without us seeing a penny of those exorbitant profits.   Finally, Foroohar lays out a plan for how we can resist, by creating a framework that fosters innovation while also protecting us from the dark side of digital technology. Praise for Don’t Be Evil “At first sight,  Don’t Be Evil looks like it’s doing for Google what muckraking journalist Ida Tarbell did for Standard Oil over a century ago. But this whip-smart, highly readable book’s scope turns out to be much broader. Worried about the monopolistic tendencies of big tech? The addictive apps on your iPhone? The role Facebook played in Donald Trump’s election? Foroohar will leave you even more worried, but a lot better informed.” —Niall Ferguson, Milbank Family Senior Fellow at the Hoover Institution, Stanford, and author of The Square and the Tower Review “This book goes beyond the economic problems of market distortion and monopoly power and examines the broader implications for society of the untrammeled and under-regulated Silicon Valley companies. Foroohar demonstrates that while the creed ‘don’t be evil’ may have initially inspired the Silicon Valley giants, its principle has long been left behind.” —Joseph E. Stiglitz, Nobel Laureate in economics   “If journalism is the first rough draft of history, then we are most fortunate to have Rana Foroohar’s laser vision and trenchant business analysis turned on the tech giants and the gluttonous anti-democratic surveillance capitalism that is their most far-reaching innovation. Foroohar’s examination of Big Tech’s audacity, plunder, and self-dealing economics is a crucial contribution to the growing debate on how to constrain the dark power of the tech corporations, binding them to the real needs of people and society.” —Shoshana Zuboff, author of The Age of Surveillance Capitalism and Professor Emerita at Harvard Business School “Rana Foroohar’s new book explains how Big Tech firms have moved permanently beyond the reach of tax laws by leveraging the same opaque financial wizardry and scale that big banks did before the financial crisis, while also exploiting information asymmetries that demote us from citizens to mere consumers. Her urgent message: ‘Yes, we really are living in the Matrix,’ and it’s time to rise up and res

₱ 1,502.00
Pre-order Item
I confirm to purchase this pre-order item.
Other Choices
Return Policy
For more details please visit our page about Cancellations, Returns, and Refunds