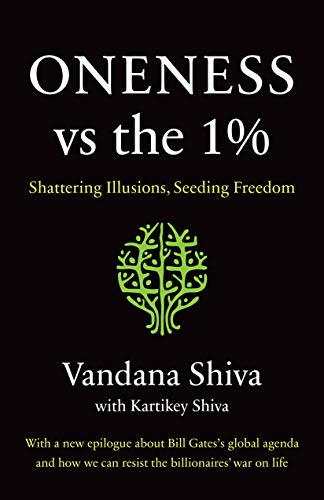 About Oneness Vs. The 1%: Shattering Illusions, Seeding

Product Description With a new epilogue about Bill Gates’s global agenda and how we can resist the billionaires’ war on life Widespread poverty and malnutrition, an alarming refugee crisis, social unrest, and economic polarization have become our lived reality as the top 1% of the world’s seven-billion-plus population pushes the planet―and all its people―to the social and ecological brink. In Oneness vs. the 1%, Vandana Shiva takes on the Billionaires Club of Gates, Buffet, and Zuckerberg, as well as other modern empires whose blindness to the rights of people, and to the destructive impact of their construct of linear progress, have wrought havoc across the world. Their single-minded pursuit of profit has undemocratically enforced uniformity and monocultures, division and separation, monopolies and external control―over finance, food, energy, information, healthcare, and even relationships. Basing her analysis on explosive, little-known facts, Shiva exposes the 1%’s model of philanthrocapitalism, which is about deploying unaccountable money to bypass democratic structures, derail diversity, and impose totalitarian ideas based on One Science, One Agriculture, and One History. She calls for the “resurgence of real knowledge, real intelligence, real wealth, real work, real well-being,” so that people can reclaim their right to: Live Free. Think Free. Breathe Free. Eat Free. Review “All of us who care about the future of Planet Earth must be grateful to Vandana Shiva. Her voice is powerful, and she is not afraid to tackle those corporate giants that are polluting, degrading and ultimately destroying the natural world.”―Jane Goodall, UN Messenger of Peace “Her fierce intellect and her disarmingly friendly, accessible manner have made her a valuable advocate for people all over the developing world.”―Ms. magazine “A rock star in the worldwide battle against genetically modified seeds.”―Bill Moyers “Shiva is a burst of creative energy, an intellectual power.”―The Progressive “One of the world’s most prominent radical scientists.”―The Guardian About the Author Vandana Shiva is a world-renowned environmental thinker and activist, a leader in the International Forum on Globalisation, and of the Slow Food Movement. Director of Navdanya and of the Research Foundation for Science, Technology and Ecology, and a tireless crusader for farmers’, peasants’, and women’s rights, she is the author and editor of a score of influential books, among them Making Peace with the Earth; Soil Not Oil; Globalization’s New Wars; Seed Sovereignty, Food Security: Women in the Vanguard; and Who Really Feeds the World? Shiva is the recipient of over twenty international awards, including the Right Livelihood Award (1993); the Medal of the Presidency of the Italian Republic (1998); the Horizon 3000 Award (Austria, 2001); the John Lennon-Yoko Ono Grant for Peace (2008); the Save the World Award (2009); the Sydney Peace Prize (2010); the Calgary Peace Prize (2011); and the Thomas Merton Award (2011). She was the Fukuoka Grand Prize Laureate in 2012. Kartikey Shiva is a shatterer of illusions, grower of freedom, and agent of light.

Who Really Feeds The World?: The Failures Of Agrib...

Soil Not Oil: Environmental Justice In An Age Of C...

Before
₱ 1,186.00
Pre-order Item
I confirm to purchase this pre-order item.
Other Choices
Return Policy
For more details please visit our page about Cancellations, Returns, and Refunds