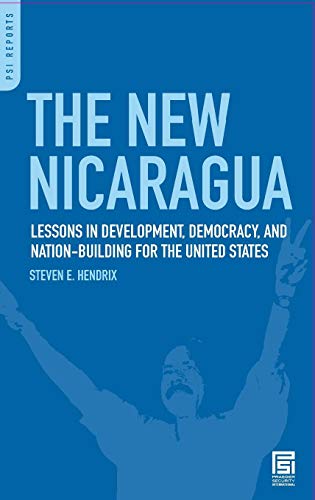 The New Nicaragua: Lessons in Development, Democracy, and Nation-Building for the United States (Praeger Security International)

About The New Nicaragua: Lessons In

Product description An insider's look at the changes going on in Nicaragua―the internal political maneuvering of Daniel Ortega, the responses by the United States, and the success of recent American pro-democracy civil society efforts there. At the time of Ortega's return to the presidency, attorney and award-winning author Steven Hendrix was on the ground in Nicaragua working for the U.S. Agency for International Development. The New Nicaragua: Lessons in Development, Democracy, and Nation-Building for the United States is Hendrix's eyewitness account of the changes going on there. What Hendrix found in the new Nicaragua is a decidedly mixed bag: a presidential campaign marked by dirty tricks and backroom deals, yet an election held under the first neutral comprehensive observation ever in the developing world; an overt effort to appease the United States even while attempting to undermine U.S. policy in the region. Yet despite this, Hendrix saw U.S. pro-democracy, civil society efforts succeed, disproving the many skeptics who doubt that nation-building is even possible. Review "In the spring of 2005, the US Agency for International Development (USAID) asked its erstwhile agent Hendrex (law, DePaul U., Chicago) to go to the Central American country to spearhead the US government's democracy building. Here he recounts his two years in Managua, of which he is very proud. Among his topics are jumpstarting the rule of law in August 2005, international collaboration and turkeys in November, the Atlantic Coast regional election in March 2006, the Organization of American States engages in August, the election and its aftermath in November, the new Ortega administration begins to show its stripes in February 2007, and toward sustainability in counterweights and democracy in June." - Reference & Research Book News About the Author Steven E. Hendrix is a crisis, stabilization and governance officer with the U.S. Agency for International Development and a Fellow with the International Human Rights Law Institute, DePaul University College of Law, Chicago, IL. He is an attorney licensed in Bolivia, Guatemala and the United States.

Fast Forward Investing: How To Profit From AI, Dri...

World In Crisis: A Global Analysis Of Marx's Law O...

Open Marxism 4: Against A Closing World

Before
₱ 1,939.00
Pre-order Item
I confirm to purchase this pre-order item.
Other Choices
Return Policy
For more details please visit our page about Cancellations, Returns, and Refunds