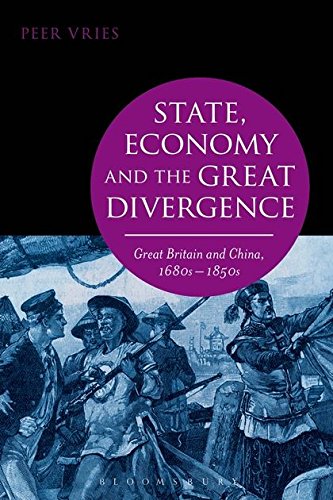 State, Economy and the Great Divergence

About State, Economy And The Great Divergence

Product Description State, Economy and the Great Divergence provides a new analysis of what has become the central debate in global economic history: the 'great divergence' between European and Asian growth. Focusing on early modern China and Western Europe, in particular Great Britain, this book offers a new level of detail on comparative state formation that has widereaching implications for European, Eurasian and global history. Beginning with an overview of the historiography, Peer Vries goes on to extend and develop the debate, critically engaging with the huge volume of literature published on the topic to date. Incorporating recent insights, he offers a compelling alternative to the claims to EastWest equivalence, or Asian superiority, which have come to dominate discourse surrounding this issue. This is a vital update to a key issue in global economic history and, as such, is essential reading for students and scholars interested in keeping up to speed with the ongoing debates. Review “This book is an impressive economic comparison between Western Europe (especially Britain) and China during the long eighteenth century. It is a much needed and balanced account that tries, I think on the whole successfully, to not succumb to either a Euro-centric or China-centric interpretation. It engages with all the main themes pertinent to such a history but, ultimately, its originality lies in emphasising the Western European, particularly Britain's, form of state. The ability to raise revenues to fund expensive wars and colonial expansion has a ramification that, ultimately, is the primary key to the “Great Divergence” with China.” ―William J. Ashworth, Senior Lecturer in History, University of Liverpool, UK “Peer Vries turns traditional political economy on its head: instead of an open, laissez-faire British economy confronting an oppressive and centralized Imperial state in China in the 18th century, Vries shows us a fiscal-mercantilist Britain extracting enormous taxes and a decentralized and inefficient Chinese government receiving rather few. Moreover, Vries argues that British industrial success arose because of – not in spite of – Britain's high taxation supporting an aggressively mercantilist and imperialist state. This deeply learned book will challenge both traditionalists' and “California School” revisionists' view of the Great Divergence; it marks a powerful new turn and major advance in understanding the origins of modern economies.” ―Jack A. Goldstone, Professor of Public Policy, George Mason University, USA “Professor Peer Vries' new book is a continuation of his decade-long pursuit for a better answer to a cluster of puzzles associated with the 'Great Divergence' that set Western Europe and China historically apart. Unlike the conventional views that look at a wide range of variables such as natural endowments, population, factor productivities, market activities, real wages and GDP, the author identifies the state as the prime mover in Eurasian history. The rise of the West was thus a result of a pushy 'visible hand' that dictated the allocation of key resources. He also probes further into the process and mechanisms of state-building by the elite that held political, ideological, legal, economic and military powers. Thus, the seed of the Great Divergence was planted by the elites in Western Europe and China long before 1700 AD. Professor Vries's path-breaking work re-sets our debate in global history.” ―Kent G. Deng, Professor of Economic History, London School of Economics, UK Book Description An exploration of the debates surrounding the comparative economic development of Europe and Asia. About the Author Peer Vries is University Professor at the Institute for Economic and Social History, University of Vienna, Austria.

Why Europe Grew Rich And Asia Did Not: Global Econ...

Before
₱ 2,202.00
Pre-order Item
I confirm to purchase this pre-order item.
Other Choices
Return Policy
For more details please visit our page about Cancellations, Returns, and Refunds