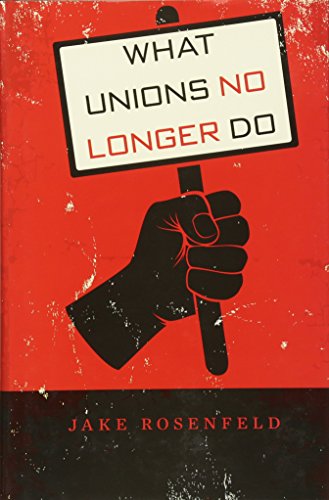 What Unions No Longer Do

About What Unions No Longer Do

Product Description From workers' wages to presidential elections, labor unions once exerted tremendous clout in American life. In the immediate post-World War II era, one in three workers belonged to a union. The fraction now is close to one in ten, and just one in twenty in the private sector--the lowest in a century. The only thing big about Big Labor today is the scope of its problems. While many studies have attempted to explain the causes of this decline, What Unions No Longer Do lays bare the broad repercussions of labor's collapse for the American economy and polity.Organized labor was not just a minor player during the "golden age" of welfare capitalism in the middle decades of the twentieth century, Jake Rosenfeld asserts. Rather, for generations it was the core institution fighting for economic and political equality in the United States. Unions leveraged their bargaining power to deliver tangible benefits to workers while shaping cultural understandings of fairness in the workplace. The labor movement helped sustain an unprecedented period of prosperity among America's expanding, increasingly multiethnic middle class.What Unions No Longer Do shows in detail the consequences of labor's decline: curtailed advocacy for better working conditions, weakened support for immigrants' economic assimilation, and ineffectiveness in addressing wage stagnation among African Americans. In short, unions are no longer instrumental in combating inequality in our economy and our politics, and the result is a sharp decline in the prospects of American workers and their families. Review "In What Unions No Longer Do, Jake Rosenfeld offers an engaging account of the decline of organized labor in the United States and an important call to action. Complete with extensive data, charts, and an unsparing, investigative style, What Unions No Longer Do captures the 'whys' and 'hows' of de-unionization and why we should all be concerned. This is a sobering story for anyone who cares about social and economic justice and who aspires to provide a better life for the generation that follows. " - Senator Sherrod Brown (D-OH) " What Unions No Longer Do sets a new standard for research on the economic, social, and political consequences of the dramatic decline of American unions. Deeply researched, analytically sophisticated, and engagingly written, this is the book to read if you want to understand what unions used to do to lessen inequality and empower workers - and what our nation has lost as their strength has waned. " - Jacob S. Hacker, co-author of Winner-Take-All Politics: How Washington Made the Rich Richer - And Turned Its Back on the Middle Class "Jake Rosenfeld has written a fresh and authoritative book. He gives precision, chronology, and causality to some of our most pressing social concerns, from the voting propensities of public sector employees to the impact of unionism on civic engagement among working-class Hispanics. Historians of labor must read this terrific book. " - Nelson Lichtenstein, MacArthur Foundation Professor in History, University of California Santa Barbara "In What Unions No Longer Do, Jake Rosenfeld demonstrates brilliantly and authoritatively that the decline of American unions is a chief cause of the staggering rise in economic inequality. This is an important book that anyone who wants to know how our middle class dwindled and how we can rebuild it should read. " - Harold Meyerson, Washington Post columnist and Editor-at-Large for The American Prospect About the Author Jake Rosenfeld is Professor of Sociology at Washington University in St. Louis, where he specializes in the political and economic causes of inequality in advanced democracies. He is author of What Unions No Longer Do and writes for the New York Times, Politico, and the Los Angeles Times, among other outlets.

₱ 1,385.00
Pre-order Item
I confirm to purchase this pre-order item.
Other Choices
Return Policy
For more details please visit our page about Cancellations, Returns, and Refunds