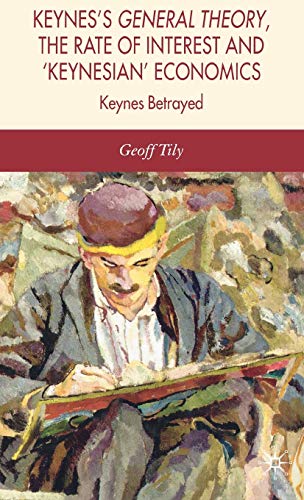 Keynes's General Theory, the Rate of Interest and Keynesian' Economics

Keynes's General Theory, the Rate of Interest and Features

About Keynes's General Theory, The Rate Of Interest And

Product Description This book argues that Keynesian economists have betrayed Keynes' theory and policy conclusions, and that the world has been misled about those policies. Keynesians have focused attention on policies for dealing with effects of economic failure as they arise, whereas Keynes was concerned with the cause and then the prevention of economic failure. Review ' such an important book not merely another book on the history of Keynes's monetary thought. It provides compelling evidence of where 'Keynesians' of all shades have gone wrong and simultaneously provides them with the ammunition to generalize what passes for modern monetary theory and macroeconomics. It enables macroeconomists to put Keynes back into Keynesian economics.' - Colin Rogers, University of Adelaide, Australia 'This is an extraordinary book and a major and significant contribution to Post-Keyensian literature.' - Jan Toporowski, School of African and Oriental Studies, University of London, UK 'Above all, this book is a good read, which may achieve that rare combination of a high level of scholarship with relevance to the policy advisor.' - Mark Hayes, University of Cambridge, UK What's all the fuss about then? Well, unlike most books on economics, this one is beautifully written, with only the simplest few equations, no acronyms or abstruse jargon in sight, and not too long. In three parts History, Theory, and Macroeconomics after Keynes Tily explains carefully and clearly what Keynes was concerned about and actually wrote; how that was used and abused by his contemporaries for their own academic purposes; and what are the implications of his persuasive arguments for the contemporary policy debate. . Tily argues in his new preface, at first surprisingly but ultimately convincingly, that it follows that Keynes's own view would have been that the problems of the last decade have been caused by so much credit advanced not at interest rates that were too low, but rather too high and that the multitude of derivatives (CDO² and so on) were then spawned in a doomed attempt to lower the effective cost of the debt burden assumed. It is a work of inspiring scholarship that will surely make a great present for someone interested in both economics and the history of the mid-twentieth century who would like to understand more about whom to support in the current vigorous policy debates: Krugman or Rogoff? Wolf or Osborne? And just what Keynes himself would have thought about what they have to say, . Do buy! - Diana Hunter, Financial World About the Author GEOFF TILY works as an economist at the Office for National Statistics, UK. He has been a member of the Government Statistical Service since 1989. He did his MSc in Economics at University College London and a PhD under the supervision of Victoria Chick.

Systemic Fragility In The Global Economy

$2.00 A Day: Living On Almost Nothing In America

Gandhi And The Future Of Economics

₱ 1,696.00
Pre-order Item
I confirm to purchase this pre-order item.
Other Choices
Return Policy
For more details please visit our page about Cancellations, Returns, and Refunds