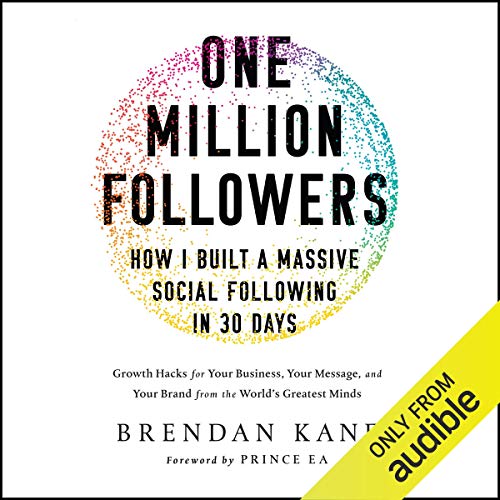 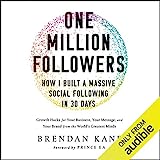 One Million Followers: How I Built a Massive Social Following in 30 Days: Growth Hacks for Your Business, Your Message, and Your Brand from the World's Greatest Minds

About One Million Followers: How I Built A Massive Social

Over 60 billion online messages are sent on digital platforms every day, and only a select few succeed in the mad scramble for customer attention.  This means that the question for anyone who wants to gain mass exposure for their transformative content, business, or brand or connect with audiences around the globe is no longer if they should use social media but how to best take advantage of the numerous different platforms.  How can you make a significant impact in the digital world and stand out among all the noise?  Digital strategist and "growth hacker" Brendan Kane has the answer and will show you how - in 30 days or less. A wizard of the social media sphere, Kane has built online platforms for A-listers including Taylor Swift and Rihanna. He's advised brands such as MTV, Skechers, Vice, and IKEA on how to establish and grow their digital audience and engagement. Kane has spent his career discovering the best tools to turn any no-name into a top influencer simply by speaking into a camera or publishing a popular blog - and now he'll share his secrets with you.  In One Million Followers, Kane will teach you how to gain an authentic, dedicated, and diverse online following from scratch; create personal, unique, and valuable content that will engage your core audience; and build a multi-media brand through platforms like Facebook, Instagram, YouTube, Snapchat, and LinkedIn.  Featuring in-depth interviews with celebrities, influencers, and marketing experts, including:  Chris Barton, cofounder and board director of Shazam and former head of Android business development for Google   Ray Chan, CEO and cofounder of 9GAG  Julius Dein, internet personality and magician with nearly 16 million Facebook followers  Mike Jurkovac, Emmy Award-winner and creative director of will.i.am and the Black Eyed Peas  Phil Ranta, former COO of Studio71 and VP of network at Fullscreen

$12 Billion Of Inside Marketing Secrets Discovered...

Buy Now: Creative Marketing That Gets Customers To...

Advertising, Promotion, And Other Aspects Of Integ...

The New Rules Of Marketing & PR: How To Use Social...

The New Rules Of Marketing And PR: How To Use Soci...

₱ 1,819.00
Pre-order Item
I confirm to purchase this pre-order item.
Other Choices
Return Policy
For more details please visit our page about Cancellations, Returns, and Refunds