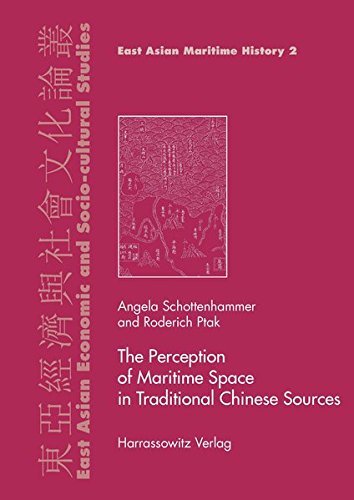 About The Perception Of Maritime Space In Traditional

The present collection of essays has originally been prepared for an international conference entitled "Maritime Space in Traditional Chinese Sources" which has been convened by the editors at Munich University in February 2005. The contributions included here introduce various aspects related to East Asian seas - from the Japanese Sea to the South China Sea, with the Yellow and East China Seas constituting the core regions of the entire area - and some of its "adjacent" areas. Although Braudelian categories are inherently present in the discussion and directly addressed in one or two papers, the focus lies on a set of more "basic" variables, which are intimately linked to the idea of contact zones, or alternatively, the parallel (and apparently older) notion that the sea should be seen as a protective belt around the mainland. This volume is consequently primarily concerned with the perception of maritime space in traditional Chinese sources, the division of this space into oceans and seas, the existence, usage and management of trade routes, and, above all, of China's coastal waters, or maritime periphery. For this purpose, in addition to textual sources, maps will be examined as well. As the perception, division and management of maritime space cannot be completely disassociated from other themes - such as trade and travel, diplomacy and military controls, or even daily life during a sea voyage - these aspects were also touched upon in the discussion. But they are of secondary importance and subordinated to the general issue of "geography". With this in mind, following an introductory essay by Angela Schottenhammer, the contributions are divided into three sections: (1) Maritime Space: Trade and Defence; (2) Maritime Space: Coasts, Routes, Oceans; (3) Maritime Space and Maps. The articles by Chang Pin-tsun, Jane Kate Leonard and Jung Byung-chul fall into the first category. Those by Chen Bo / Liu Yingsheng, Sally K. Church, Christine Moll-Murata, Li Tana and Mathieu Torck belong to the second group, while the last section is comprised by the papers of Li Xiaocong, Claudine Salmon and Roderich Ptak.There are many "cross connections" between these essays. Geographically, some of them pertain to the northern spheres, especially the Liaodong-Korea region, others look at the South China Sea, or even at areas far beyond these two. Some are case studies, others deal with general dimensions. The military element, usually in the form of coastal defence, is not only present in the first section, but also in the "cartographic" segment, and in one or two contributions which appear in part two. Furthermore, readers will find that the idea of contact zones, associated with a good degree of open-mindedness towards the "outer world", is present in some texts, just as they will discover that in other cases, the sea still appears as a kind of barrier.

Acedia And Its Discontents: Metaphysical Boredom I...

Jacob Of Sarug's Homily On The Creation Of Adam An...

Rethinking Sexuality: God's Design And Why It Matt...

Doors In The Walls Of The World: Signs Of Transcen...

Human Origins And The Image Of God: Essays In Hono...

Before
₱ 4,176.00
Pre-order Item
I confirm to purchase this pre-order item.
Other Choices
Return Policy
For more details please visit our page about Cancellations, Returns, and Refunds