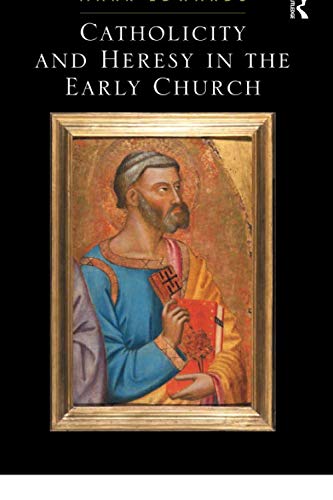 Catholicity and Heresy in the Early Church

About Catholicity And Heresy In The Early Church

Product description While it has often been recognised that the development of Christian orthodoxy was stimulated by the speculations of those who are now called heretics, it is still widely assumed that their contribution was merely catalytic, that they called forth the exposition of what the main church already believed but had not yet been required to formulate. This book maintains that scholars have underrated the constructive role of these "heretical" speculations in the evolution of dogma, showing that salient elements in the doctrines of the fall, the Trinity and the union of God and man in Christ derive from teachings that were initially rejected by the main church. Mark Edwards also reveals how authors who epitomised orthodoxy in their own day sometimes favoured teachings which were later considered heterodox, and that their doctrines underwent radical revision before they became a fixed element of orthodoxy. The first half of the volume discusses the role of Gnostic theologians in the formation of catholic thought; the second half will offer an unfashionable view of the controversies which gave rise to the councils of Nicaea, Ephesus and Chalcedon . Many of the theories advanced here have not been broached elsewhere, and no synthesis on this scale had been attempted by other scholars. While this book proposes a revision in the scholarly perception of early Christendom, it also demonstrates the essential unity of the tradition. Review ’...Edwards demonstrates skillful argumentation and a mastery of sources...Recommended.’ Choice ’[Edwards] demonstrates in an elucidating way the diversity and plurality of the theological thinking of early Christianity. [...] Edwards discovers a theological unity in places where it was previously not sought, namely in tenets and thinkers considered as heterodox. This original and intriguing study will certainly evoke much discussion in the research of early Christianity.’ Ephemerides Theologicae Lovanienses ’Edwards’s scholarship, extending across the whole period under investigation, is truly impressive, as is his theological ’razor’ (if the expression be permitted), which rejects the defeatist modern tendency to split up early Christianity into innumerable ’hermetic and discordant ’’Christianities’’’... Catholicity and Heresy in the Early Church can be recommended as a valuable and concise contribution to the study of early Christian doctrine and, more particularly, as a new attempt to appreciate the interrelationship between heresy and orthodoxy...’ Journal of Theological Studies 'Mark Edwards, whose knowledge of early Christian theology is both broad and deep, and which is matched only by his understanding of the philosophical milieu in which this theology developed, offers in this slender but important volume a deeper understanding of the vexed question of the relationship between orthodoxy and heresy in the first centuries of the common era...' Religious Studies Review 'Edwards has done a great service in writing this book, and its power is demonstrated in its ability to provoke reconsiderations of what is too facilely believed about the fascinating world of early Christianity.' The Thomist About the Author Mark Edwards is Lecturer in Patristics, Christ Church, Oxford and author of the following books: Translation and commentary: Philoponus. Physics of Aristotle, Book 3 (Duckworth, 1994). Three translations with Commentary: Optatus, Against the Gnostics (1997), Neoplatonic Saints (2002), Constantine and Christendom (2003), all for Liverpool University Press (translated; Texts for Historians). Ancient Christian Commentary on Scripture, New Testament VIII: Galatians, Ephesians, Philippians (Inter-Varsity Press, 1999). Three edited volumes for Clarendon Press: Portraits (with Simon Swain, 1997); Apologetics in the Roman World (with Simon Price, Martin Goodman, 1999); Approaching Late Antiquity (with Simon Swain, 2004). Origen against Plato (Ashgate, 2002). John through the Centurie

The Powers Of The Holy: Religion, Politics, And Ge...

A Book Of Advent And Christmas Prayers

Lost Books Of The Bible For Dummies

The Way Of Mastery, Pathway Of Enlightenment: The ...

A Catholic's Guide To Rome: Discovering The Soul O...

Trent: What Happened At The Council

Before
₱ 1,699.00
Pre-order Item
I confirm to purchase this pre-order item.
Other Choices
Return Policy
For more details please visit our page about Cancellations, Returns, and Refunds