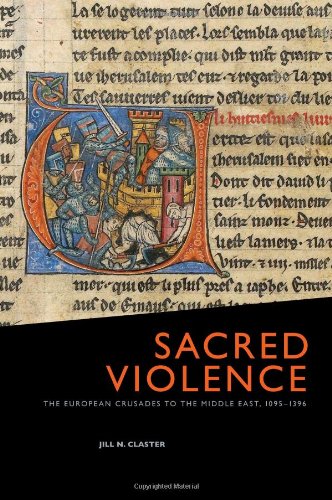 Sacred Violence: The European Crusades to the Middle East, 1095-1396

Sacred Violence: The European Crusades to the Features

About Sacred Violence: The European Crusades To The

Product Description In Sacred Violence, renowned medieval historian Jill N. Claster examines warfare between Christians and Muslims for control of the embattled city of Jerusalem. Beyond the battlefield, however, Claster explains the relationship of Jews, Christians, and Muslims to the Holy City and how that relationship still resonates today. The book encompasses the history of the kingdom founded by the Crusaders which lasted, against all odds, for two hundred years, and details the richness that emerged from the interplay of its many cultural groups. It also tells the story of how and why the Crusades came about, their impact on the Middle East and Europe, and their legacy to subsequent generations. Sacred Violence includes twenty-eight black-and-white images, a sumptuous colour insert, and numerous maps to draw the reader closer to this tumultuous history. A chronology and a list of key rulers provide further clarification of events. An extensive bibliography is included. Review The reading public's interest in the crusades has been renewed by its curiosity about their meaning for the world in which we live. Jill N. Claster's Sacred Violence offers the reader a cogent narrative history of the crusades based on the latest research. In her recounting of events from the perspective of the Latin West, the Muslim East, the Christian East, as well as the Jewish communities caught in the crossfire, Claster interrogates the ideological basis of the concepts of holy war and jihad in Christianity and Islam. In so doing, she deftly integrates the social and political history of the crusades, its battles and institutions, with the history of religion. Sacred Violence represents a new and important resource for students of the crusades. (Ross Brann, Cornell University) Sacred Violence offers a comprehensive, balanced, and fascinating insight into the intricate world of the crusades. Although it serves as an accessible text at an undergraduate level, it also presents the important, yet often neglected, issues that continue to spark debate among the field's pre-eminent scholars. What sets Claster's work apart from the more traditional crusading texts is the book's inclusivity in its portrayal of Middle Eastern society. Here is demonstrated all the complexity and controversy of the age—set within the story of the West's quest for Jerusalem and its consequences. (S.J. Allen, The Open University) Jill Claster has successfully taken on the difficult task of retelling the complex, many-stranded history of the crusades from a broad and inclusive perspective. Her work is richly illustrated and engaging, balancing as it does descriptive narrative with a lucid presentation of interpretive insights drawn from some of the best in contemporary scholarship. The book is particularly valuable in its contextualization of the crusading story within a broader historical framework, from ancient views on Jerusalem to later echoes of inter-religious violence in Ottoman and modern times. (Robin Vose, St. Thomas University) Sacred Violence proved to be exactly what I needed: clear, thorough without losing a reader in details, consistent in its point of view, and thematically coherent. My students appreciated that the author's point of view came through in certain ways, and we were able to use that as a starting point for talking about scholarly perspectives and issues of objectivity. I also was grateful for the author's attention to historiography, since I like to prompt students to think about how we construct the past, and the extent to which the topic of 'The Crusades' is in itself a historically constructed category that bears its own story through the early modern and modern era. Overall, the volume throughout has a vibrancy and liveliness that kept us all engaged. (Jennifer Kolpacoff Deane, University of Minnesota, Morris) About the Author The late Jill N. Claster was Professor of Medieval History at New York University and Director of the Hagop Kevorkia

The Crusades: A Reader, Second Edition (Readings I...

The First Crusade: "The Chronicle Of Fulcher Of Ch...

Before
₱ 1,795.00
Pre-order Item
I confirm to purchase this pre-order item.
Other Choices
Return Policy
For more details please visit our page about Cancellations, Returns, and Refunds