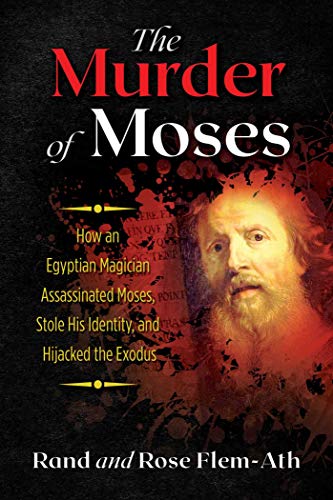 The Murder of Moses: How an Egyptian Magician Assassinated Moses, Stole His Identity, and Hijacked the Exodus

About The Murder Of Moses: How An Egyptian Magician

Product Description An investigation of how Moses was deceived and murdered by his father-in-law, Reuel • Shows how the magician Reuel staged the Burning Bush that spoke to Moses and assumed Moses’ identity after his murder • Explains how early scribes edited the Exodus story to cover Moses’ assassination and replacement and fabricated Moses’ origin story • Builds upon the Moses research of Goethe, Christopher Marlowe, and Sigmund Freud--who spent the last 40 years of his life obsessed with solving Moses’ murder The life of Moses, the greatest prophet of the Old Testament, has always been shrouded in mystery. The Bible mentions no witnesses to Moses’ death, no funeral, and no indication of his burial place, and the story of Exodus paints a very contradictory picture of this man so important to both Judaism and Christianity. At times, he is depicted as a meek, stuttering figure and at others his tyrannical commands and fits of rage terrorize the children of Israel. And, for the last years of his life, he chose to hide behind a veil. What is the explanation for these extreme shifts in character? Was Moses mentally ill? As Rand and Rose Flem-Ath reveal, the evidence points to something much more sinister: Moses was murdered and replaced by an impostor. The result of a decade-long investigation, this book continues and builds upon the research of Goethe, Christopher Marlowe, and Sigmund Freud--who spent the last 40 years of his life obsessed with solving Moses’ murder--and reaches a startling but well-evidenced conclusion that Moses was deceived and murdered by his father-in-law, Reuel. The authors show how Reuel was a skilled magician trained at Egypt’s prestigious House of Life and they reveal his motive: He was the son of Esau, from whom Jacob stole his birthright, the leadership of the Hebrew people, a role that Moses was now assuming. The authors explain how the magician Reuel used his sophisticated skills of manipulation and illusion to fake the Burning Bush that spoke to Moses as well as conceal his assumption of Moses’ identity after the murder. They reveal how the early scribes of the Old Testament inserted lags of time into the Exodus story to cover Moses’ assassination and replacement, fabricated Moses’ origin story, and changed the location of the “Mountain of God” from Edom, where Reuel was a prince, to Sinai. Unveiling the enigma of Moses’ real story--and his murder and replacement--the Flem-Aths dramatically challenge the time line and details of biblical history, exposing a cover-up at the very origins of Western religion. Review “Talk about a cold-case murder getting hot new attention! Rand and Rose Flem-Ath bring some first-class detective work to bear on one of the most important, albeit lost, stories of Western civilization, and they come to some shattering conclusions. Long ignored by mainstream academic scholarship, the extraordinary views of the father of psychoanalysis, Sigmund Freud, on the identity and fate of the Hebrew lawgiver Moses finally get some richly deserved attention. In a dramatic tale of wartime danger and personal hardship suffered by Freud and his family, the Flem-Aths offer a rare glimpse into his little-known quest to track down the details of a sensational and controversial hypothesis that he knew might get him cast out of his own community, if not killed. The result is riveting and the book is a true page-turner.”, J. Douglas Kenyon, editor and publisher of Atlantis Rising magazine and editor of Forbidden History, “Scouring the highways and byways of our ancient past, seeking clues to the true story of the biblical Moses, Rand and Rose Flem-Ath have come to some radical conclusions that are bound to cause controversy. If their conclusions are right, then a significant pieceof what we thought we knew of our religious heritage will almost certainly have to be revisited. A tour de force of original thinking.”, Scott Creighton, author of The Great Pyramid Hoax “This culminati

Atlantis Beneath The Ice: The Fate Of The Lost Con...

Before
₱ 1,236.00
Pre-order Item
I confirm to purchase this pre-order item.
Other Choices
Return Policy
For more details please visit our page about Cancellations, Returns, and Refunds