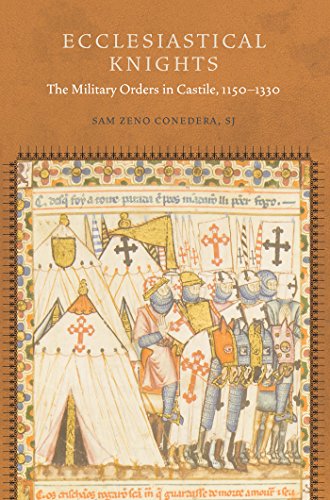 See more product information!
-
Save 32%
Before
₱ 3,550
Price Tracker
*Used item/s available. *Price and Stocks may change without prior notice
Pay with

About Ecclesiastical Knights: The Military Orders In

Product Description “Warrior monks”―the misnomer for the Iberian military orders that emerged on the frontiers of Europe in the twelfth century―have long fascinated general readers and professional historians alike. Proposing “ecclesiastical knights” as a more accurate name and conceptual model―warriors animated by ideals and spiritual currents endorsed by the church hierarchy―author Sam Zeno Conedera presents a groundbreaking study of how these orders brought the seemingly incongruous combination of monastic devotion and the practice of warfare into a single way of life.Providing a detailed study of the military-religious vocation as it was lived out in the Orders of Santiago, Calatrava, and Alcantara in Leon-Castile during the first century, Ecclesiastical Knights provides a valuable window into medieval Iberia. Filling a gap in the historiography of the medieval military orders, Conedera defines, categorizes, and explains these orders, from their foundations until their spiritual decline in the early fourteenth century, arguing that that the best way to understand their spirituality is as a particular kind of consecrated knighthood.Because these Iberian military orders were belligerents in the Reconquest, Ecclesiastical Knights informs important discussions about the relations between Western Christianity and Islam in the Middle Ages. Conedera examines how the military orders fit into the religious landscape of medieval Europe through the prism of knighthood, and how their unique conceptual character informed the orders and spiritual self-perception.The religious observances of all three orders were remarkably alike, except that the Cistercian-affiliated orders were more demanding and their members could not marry. Santiago, Calatrava, and Alcantara shared the same essential mission and purpose: the defense and expansion of Christendom understood as an act of charity, expressed primarily through fighting and secondarily through the care of the sick and the ransoming of captives. Their prayers were simple and their penances were aimed at knightly vices and the preservation of military discipline. Above all, the orders valued obedience. They never drank from the deep wellsprings of monasticism, nor were they ever meant to.Offering an entirely fresh perspective on two difficult and closely related problems concerning the military orders―namely, definition and spirituality―author Sam Zeno Conedera illuminates the religious life of the orders, previously eclipsed by their military activities. Review Ecclesiastical Knights is a lucid, original, and thoughtfully argued book. Conedera is to be commended not only for making the orders of Santiago, Calatrava, and Alcántara more accessible to anglophone scholars and students, but also for contributing to the wider debate on the place of the military orders in medieval society in a way that challenges us to rethink the common notion of "warrior monks.", Journal of Religious History This is an important study both for the history of the military orders and the history of Medieval Spain. Elegantly, thoughtfully, persuasively, Conedera guides us towards the answer to a perplexing riddle: just why did so many knights consecrate their lives to God? ---―Damian J. Smith, St. Louis University This is an important work for students of the medieval military fighting orders, the medieval church, the Crusades, the complex social structure of medieval Iberia, or the more broadly international culture of knightly society. Conedera makes a very strong case, and we might hope that, unlike Dom Quixote, his quest to unseat the idea of the “warrior monk” is not taken in vain., Journal of Military History This book is, in sum, an excellent and innovative analysis that has the further advantage of raising new questions and, hopefully, renewing a much needed debate about the profile and role of these institutions., Journal of the Historical Association I highly recommend this book and would sugge

A Lay Minister's Guide To The Book Of Common Praye...

Soul To Soul: Fourteen Gatherings For Reflection A...

The Book Of Common Prayer: A Very Short Introducti...

Life In The Father's House: A Member's Guide To Th...

Before
₱ 1,189.00
Pre-order Item
I confirm to purchase this pre-order item.
Other Choices
Return Policy
For more details please visit our page about Cancellations, Returns, and Refunds