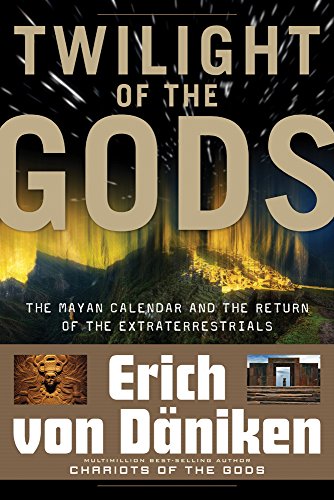 Twilight of the Gods: The Mayan Calendar and the Return of the Extraterrestrials

See more product information!
-
Save 16%
Before
₱ 1,352
Price Tracker
*Used item/s available. *Price and Stocks may change without prior notice
Pay with

Twilight of the Gods: The Mayan Calendar and the Features

About Twilight Of The Gods: The Mayan Calendar And The

Product Description High up in the Bolivian Andes-4,000 meters above sea level-lies Puma punku, an ancient ruined city that simply could never have been constructed by its Stone Age inhabitants."Something here really stinks to high heaven," writes Erich von Daniken. "In Twilight of the Gods," says von Daniken, "I document precisely what it was that left the first visitors breathless as they stood before the mighty stone blocks some 400 years ago. I will show you what archeologists discovered hundreds of years ago and demonstrate how much has been destroyed over the centuries. Intentionally."I will also prove that Puma punku was not built by any Stone Age people. "And in December 2012, the gods will return from their long journey and appear again here on Earth. At least that is what the Mayan calendar would have us believe. "The so-called gods--the extraterrestrials-- will come again. We're headed for a 'god shock' of major proportions. "But doesn't anyone with half a brain know that interstellar travel is simply impossible because of the sheer distances involved? And that extraterrestrials would never look like us? "Well, dear readers, I destroy these preconceptions. Systematically. One bit at a time." In his own inimitable way, Erich von Daniken picks these preconceptions and prejudices apart with a clarity no other author could manage. Review "His ideas have a mythic appeal..."--James A. Herrick, Christianity Today, Reviews About the Author von Däniken is arguably the most widely read and most copied nonfiction author in the world. He published his first (and best known) book, Chariots of the Gods, in 1968. The worldwide bestseller was followed by 40 more books, including the recent bestsellers The Gods Never Left Us, Eyewitness to the Gods, Twilight of the Gods, History Is Wrong, Evidence of the Gods, Remnants of the Gods, and Odyssey of the Gods. His works have been translated into 28 languages and have sold more than 65 million copies. Several have also been made into films. Von Däniken's ideas have been the inspiration for a wide range of television series, including the History channel's hit Ancient Aliens. His research organization, the A.A.S.R.A./legendarytimes.com (Archaeology, Astronautics & SETI Research Association), comprises laymen and academics from all walks of life. Internationally, there are about 10,000. members. He lives in Switzerland but is an ever-present figure on the international lecture circuit, traveling more than 100,000 miles a year.

Evidence Of The Gods: A Visual Tour Of Alien Influ...

Before
₱ 1,455.00
Pre-order Item
I confirm to purchase this pre-order item.
Other Choices
Return Policy
For more details please visit our page about Cancellations, Returns, and Refunds