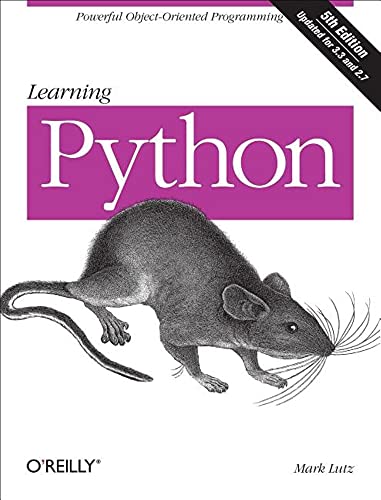 Product Description Get a comprehensive, in-depth introduction to the core Python language with this hands-on book. Based on author Mark Lutz’s popular training course, this updated fifth edition will help you quickly write efficient, high-quality code with Python. It’s an ideal way to begin, whether you’re new to programming or a professional developer versed in other languages. Complete with quizzes, exercises, and helpful illustrations, this easy-to-follow, self-paced tutorial gets you started with both Python 2.7 and 3.3— the latest releases in the 3.X and 2.X lines—plus all other releases in common use today. You’ll also learn some advanced language features that recently have become more common in Python code. Explore Python’s major built-in object types such as numbers, lists, and dictionaries Create and process objects with Python statements, and learn Python’s general syntax model Use functions to avoid code redundancy and package code for reuse Organize statements, functions, and other tools into larger components with modules Dive into classes: Python’s object-oriented programming tool for structuring code Write large programs with Python’s exception-handling model and development tools Learn advanced Python tools, including decorators, descriptors, metaclasses, and Unicode processing About the Author Mark Lutz is a leading Python trainer, the author of Python’s earliest and best-selling texts, and a pioneering figure in the Python world.Mark is the author of the three O’Reilly books: Learning Python, Programming Python, and Python Pocket Reference, all currently in fourth or fifth editions. He has been using and promoting Python since 1992, started writing Python books in 1995, and began teaching Python classes in 1997. As of Spring 2013, Mark has instructed 260 Python training sessions, taught roughly 4,000 students in live classes, and written Python books that have sold 400,000 units and been translated to at least a dozen languages.Together, his two decades of Python efforts have helped to establish it as one of the most widely used programming languages in the world today. In addition, Mark has been in the software field for 30 years. He holds BS and MS degrees in computer science from the University of Wisconsin where he explored implementations of the Prolog language, and over his career has worked as a professional software developer on compilers, programming tools, scripting applications, and assorted client/server systems.Mark maintains a training website () and an additional book support site on the Web ().

Before
₱ 2,805.00
Pre-order Item
I confirm to purchase this pre-order item.
Big Discount!
This product, Learning Python, 5th Edition, is currently discounted at 47% off! We don't know when it will go back to its original price so order now to secure it at this price! We'll make sure to order it immediately!
Other Choices
Return Policy
For more details please visit our page about Cancellations, Returns, and Refunds