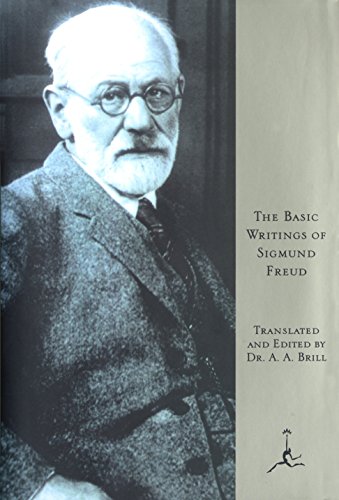 The Basic Writings of Sigmund Freud (Psychopathology of Everyday Life, the Interpretation of Dreams, and Three Contributions To the Theory of Sex)

About The Basic Writings Of Sigmund Freud

Product Description This classic edition of The Basic Writings of Sigmund Freud includes complete texts of six works that have profoundly influenced our understanding of human behavior, presented here in the translation by Dr. A. A. Brill, who for almost forty years was the standard-bearer of Freudian theories in America. • Psychopathology of Everyday Life is perhaps the most accessible of Freud’s books. An intriguing introduction to psychoanalysis, it shows how subconscious motives underlie even the most ordinary mistakes we make in talking, writing, and remembering.   • The Interpretation of Dreams records Freud’s revolutionary inquiry into the meaning of dreams and the power of the unconscious.   • Three Contributions to the Theory of Sex is the seminal work in which Freud traces the development of sexual instinct in humans from infancy to maturity. • Wit and Its Relation to the Unconscious expands on the theories Freud set forth in The Interpretation of Dreams. It demonstrates how all forms of humor attest to the fundamental orderliness of the human mind. • Totem and Taboo extends Freud’s analysis of the individual psyche to society and culture. • The History of Psychoanalytic Movement makes clear the ultimate incompatibility of Freud’s ideas with those of his onetime followers Adler and Jung. About the Author Sigmund Freud was born in 1856 in Moravia, Austrian Empire (now the Czech Republic). Between the ages of four and eighty-two his home was in Vienna; in 1938 Hitler's invasion of Austria forced him to seek asylum in London, where he died in the following year.His career began with several years of brilliant work on the anatomy and physiology of the nervous system. He was almost thirty when, after a period of study under Charcot in Paris, his interests first turned to psychology, and another ten years of clinical work in Vienna (at first in collaboration with Breuer, an older colleague) saw the birth of his creation, psychoanalysis. This began simply as a method of treating neurotic patients by investigating their minds, but it quickly grew into an accumulation of knowledge about the workings of the mind in general, whether sick or healthy. Freud was thus able to demonstrate the normal development of the sexual instinct in childhood and, largely on the basis of an examination of dreams, arrived at his fundamental discovery of the unconscious forces that influence our everyday thoughts and actions. Freud's life was uneventful, but his ideas have shaped not only many specialist disciplines, but the whole intellectual climate of the last half century. A. A. Brill (1874–1948) was the standard-bearer of Freudian theories in America for almost forty years. Excerpt. © Reprinted by permission. All rights reserved. 1 FORGETTING OF PROPER NAMES   During the year 1898, I published a short essay, On the Psychic Mechanism of Forgetfullness.1 I shall now repeat its contents and take it as a starting-point for further discussion. I have there undertaken a psychologic analysis of a common case of temporary forgetfulness of proper names, and from a pregnant example of my own observation, I have reached the conclusion that this frequent and practically unimportant occurrence of a failure of a psychic function—of memory—admits an explanation which goes beyond the customary utilization of this phenomenon.   If an average psychologist should be asked to explain how it happens that we often fail to recall a name which we are sure we know, he would probably content himself with the answer that proper names are more apt to be forgotten than any other content of memory. He might give plausible reasons for this “forgetting preference” for proper names, but he would not assume any deep determinant for the process.   I was led to examine exhaustively the phenomenon of temporary forgetfulness through the observation of certain peculiarities, which, although not general, can, nevertheless, be seen clearly in some cases. In th

The Ego And The Id (The Standard Edition Of The Co...

The Interpretation Of Dreams: The Complete And Def...

Before
₱ 1,191.00
Pre-order Item
I confirm to purchase this pre-order item.
Other Choices
Return Policy
For more details please visit our page about Cancellations, Returns, and Refunds