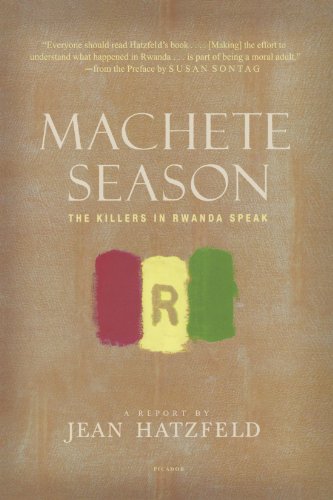 About Machete Season: The Killers In Rwanda Speak

Product Description During the spring of 1994, in a tiny country called Rwanda, some 800,000 people were hacked to death, one by one, by their neighbors in a gruesome civil war. Several years later, journalist Jean Hatzfeld traveled to Rwanda to interview ten participants in the killings, eliciting extraordinary testimony from these men about the genocide they perpetrated. As Susan Sontag wrote in the preface, Machete Season is a document that "everyone should read . . . [because making] the effort to understand what happened in Rwanda . . . is part of being a moral adult." Review “Hatzfeld's harrowing documentation of the voices of Rwandan killers reminds us once again how perfectly human it can be to be perfectly inhumane.” ―Philip Gourevitch“Monstrous in scope, unfathomable in cruelty, annihilating in implication, the concept of genocide all but defies imagination. That is why reading Jean Hatzfeld's interviews with perpetrators of the 1994 Rwanda massacre is so profoundly disturbing.” ―The Baltimore Sun“Stunning . . . What makes the book so astonishing are . . . the voices of the men, many of whom speak in a kind of chilling, breathtaking poetry.” ―O magazine About the Author Jean Hatzfeld, an international reporter for Libération since 1973, is the author of many books, including Machete Season and The Antelope's Strategy on Rwanda as well as books on the war in Croatia and Bosnia. He lives in Paris. Susan Sontag was the author of four novels, including The Benefactor, Death Kit, The Volcano Lover, and In America, which won the 2000 National Book Award for fiction; a collection of stories, I, etcetera; several plays, including Alice in Bed; and nine works of essays, among then On Photography, which won the National Books Critics Circle Award for criticism. In 2001, Sontag was awarded the Jerusalem Prize for the body of her work. She died in New York City in 2004.

Before
₱ 847.00
Pre-order Item
I confirm to purchase this pre-order item.
Other Choices
Return Policy
For more details please visit our page about Cancellations, Returns, and Refunds