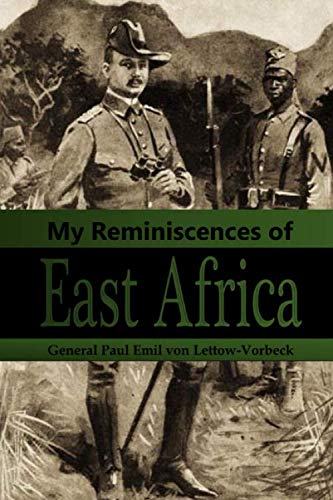 My Reminiscences of East Africa

About My Reminiscences Of East Africa

"The greatest single guerrilla operation in history, and the most successful." - Edwin Palmer Hoyt"At the end of World War I, only one German force remained undefeated---that of Major General von Lettow-Vorbeck in German East Africa." -Infantry, 1986"Although highly outnumbered, Lettow-Vorbeck and his men successfully held a front using guerrilla tactics and avoiding fighting out in the open." -HistoryNet"A master of guerrilla warfare, General von Lettow-Vorbeck lived by a warrior’s code of chivalry." - Timothy AshbyKnown as the Lion of Africa, General Paul Emil von Lettow-Vorbeck (1870–1964), commanded a small German force against the overwhelming British forces in the German East Africa campaign during World War One. With a force that never exceeded about 14,000 (3,000 Germans and 11,000 Africans), Lettow-Vorbeck would seek to hold in check a much larger force of 300,000 British, Indian, Belgian, and Portuguese troops. Lettow-Vorbeck was the only German commander to successfully invade imperial British soil during the First World War. In 1920, Lettow-Vorbeck published in English "My Reminiscences of East Africa." (The book does not include any reference to being a translation or having a translator.) In introducing his book, Lettow-Vorbeck writes of the important role of the native Askari troops: "Without immediate payment, this force, with its numerous native followers, faithfully followed its German leaders throughout the whole of the prolonged war against a more than hundredfold superiority. When the armistice came it was still fit to fight, and imbued with the best soldierly spirit." In looking back at his remarkable campaign on the way back to Europe, Lettow-Vorbeck writes: "In cold truth our small band, which at the most comprised some 300 Europeans and about 11,000 Askari, had occupied a very superior enemy force for the whole war. According to what English officers told me, 137 Generals

Before
₱ 1,172.00
Pre-order Item
I confirm to purchase this pre-order item.
Other Choices
Return Policy
For more details please visit our page about Cancellations, Returns, and Refunds