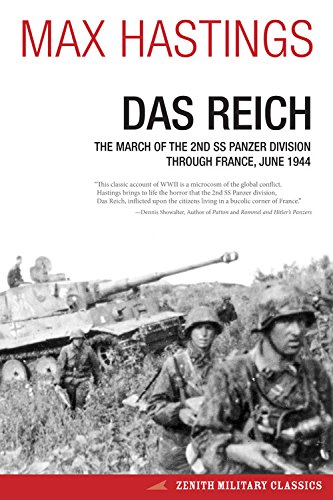 About Das Reich: The March Of The 2nd SS Panzer Division

Product Description World-renowned British historian Sir Max Hastings recounts one of the most horrific months of World War II.   June 1944, the month of the D-Day landings carried out by Allied forces in Normandy, France. Germany’s 2nd SS Panzer Division, one of Adolf Hitler’s most elite armor units, had recently been pulled from the Eastern Front and relocated to France in order to regroup, recruit more troops, and restock equipment. With Allied forces suddenly on European ground, the division—Das Reich —was called up to counter the invasion. Its march northward to the shores of Normandy, 15,000 men strong, would become infamous as a tale of unparalleled brutality in World War II.   Das Reich is Sir Max Hastings’s narrative of the atrocities committed by the 2nd SS Panzer Division during June of 1944: first, the execution of 99 French civilians in the village of Tulle on June 9; and second, the massacre of 642 more in the village of Oradour-sur-Glane on June 10. Throughout the book, Hastings expertly shifts perspective between French resistance fighters, the British Secret Service (who helped coordinate the French resistance from afar and on the ground), and the German soldiers themselves. With its rare, unbiased approach to the ruthlessness of World War II, Das Reich explores the fragile moral fabric of wartime mentality. From the Back Cover Sir Max Hastings, recipient of the 2012 Pritzker Military Library Literature Award for Lifetime Achievement in Military Writing, has written one of the classic accounts of World War II.    Days after the D-Day invasion, a Division of battle-hardened soldiers from the vicious and unrelenting battlefields on the Eastern Front, the 2nd SS Panzer, “Das Reich,” marched north from the safe confines of the south France to reinforce the defenders of Hitler's Fortress Europe on the beaches of Normandy. During their march they were hounded for every mile of their march by saboteurs of the French Resistance, as well as by agents of the Allied Special Forces . Das Reich profiles - in Hastings’ characteristic prose - the horrific reprisals that the 2nd SS Panzer Division exacted upon the citizens of Tulle and Ordour-sur-Glane, which resulted in 99 and 642 deaths, respectively.  Das Reich is a chronicle of the some of the most appalling atrocities of World War II. About the Author Sir Max Hastings is a famed British journalist and military historian who has served as a foreign correspondent for the Evening Standard and as editor-in-chief of the Daily Telegraph. Currently, he writes columns for the New York Review of Books, the Daily Mail, the Guardian, and the Sunday Times and is also the bestselling author of numerous history books on World War II, the Korean War, and the Falkland Islands.www.maxhastings.com

Before
₱ 1,001.00
Pre-order Item
I confirm to purchase this pre-order item.
Other Choices
Return Policy
For more details please visit our page about Cancellations, Returns, and Refunds