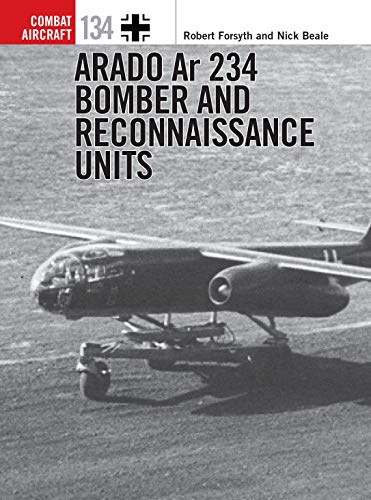 Product Description This illustrated title explores the design, evolution, and deployment of the Arado Ar 234, the world's first truly operational jet bomber and first reconnaissance jet.When the revolutionary twin jet-powered Arado Ar 234 first appeared in the skies over north-west Europe in the summer of 1944, it represented the state-of-the-art in terms of aeronautical and technical development. The Ar 234 was a formidable aircraft--powered by Jumo 004Bs, the same engine used by the Me 262, and with a maximum speed of 735 km/h and range of 1600 km/h, it was very difficult for the Allies to "catch." Here was a machine that with its superior speed could operate with impunity as both a bomber and in the reconnaissance role. As such, the aircraft became the world's first reconnaissance jet, undertaking secret, high-speed, high-altitude observation missions for the German High Command over the Allied beachheads in Normandy and other Allied strongholds. Astonishingly, in September 1944 and as late as 1945, lone Ar 234s conducted reconnaissance flights over British ports and the Mediterranean. The aircraft was equally efficient as a jet bomber--although the Ar 234B-2 bomber variant carried no defensive gun armament, it was able to deliver 1000 kg of bombs at high-speed and at either low- or high-level with considerable and devastating accuracy.This highly detailed title from renowned aviation historian Robert Forsyth explores the history of this incredible aircraft, from its development in the early 1940s to its deployment in both reconnaissance and bomber roles throughout the rest of the war. The masterful text is supported by stunning, specially commissioned artwork. About the Author Robert Forsyth has studied the history and operations of the Luftwaffe for many years. He is the author of several books on the subject as published by Classic Publications, Ian Allan Publishing, and Osprey Publishing – for whom he has written 15 titles in the ACE, DUE, COM, and XPL series, as well as the stand-alone Shadow over the Atlantic, which Aeroplane magazine rates as "highly recommended." He has also written articles for The Aviation Historian, Aeroplane, FlyPast, Combat Aircraft, Aviation News and AeroJournal magazines. He is a member of the Editorial Board of The Aviation Historian. Long-term, he is working on a major biography of the Luftwaffe commander, Generalfeldmarschall Dr.-Ing.Wolfram Freiherr von Richthofen. He lives in East Sussex, UK. Janusz Swiatlon, a veteran of service with the Polish Army's 6th Pomorska Dywizja Powietrzno-Desantowa (an airborne unit) in the 1980s, is both an enthusiast of aviation historian and a military modeler. As an illustrator, he has created numerous color aircraft profiles published in magazines and books by AF Editores, Kagero, Chevron, Stratus, and other publishing houses, including Osprey. He lives in Krakow, Poland