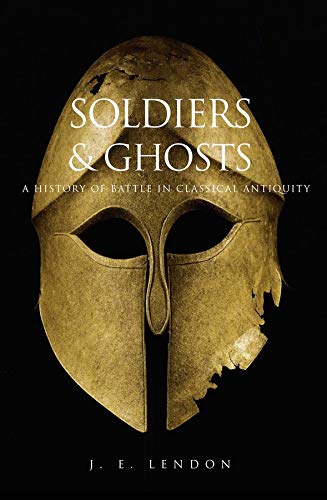 Soldiers and Ghosts: A History of Battle in Classical Antiquity

See more product information!
-
Save 9%
Before
₱ 1,893
Price Tracker
*Used item/s available. *Price and Stocks may change without prior notice
Pay with

About Soldiers And Ghosts: A History Of Battle In

Product Description A major new history of battle in the ancient world, from the age of Homer through the decline of the Roman empire What set the successful armies of Sparta, Macedon, and Rome apart from those they defeated? In this major new history of battle from the age of Homer through the decline of the Roman empire, J. E. Lendon surveys a millennium of warfare to discover how militaries change—and don’t change—and how an army’s greatness depends on its use of the past.  Noting this was an age that witnessed few technological advances, J. E. Lendon shows us that the most successful armies were those that made the most effective use of cultural tradition. Ancient combat moved forward by looking backward for inspiration—the Greeks, to Homer; the Romans, to the Greeks and to their own heroic past. The best ancient armies recruited soldiers from societies with strong competitive traditions; and the best ancient leaders, from Alexander to Julius Caesar, called upon those traditions to encourage ferocious competition at every rank. Ranging from the Battle of Champions between Sparta and Argos in 550 B.C. through Julian’s invasion of Persia in A.D. 363, Soldiers and Ghosts brings to life the most decisive military contests of ancient Greece and Rome. Lendon places these battles, and the methods by which they were fought, in a sweeping narrative of ancient military history. On every battlefield, living soldiers fought alongside the ghosts of tradition—ghosts that would inspire greatness for almost a millennium before ultimately coming to stifle it. Review "Brilliantly analyzed."—William Grimes, New York Times "Soldiers and Ghosts, like any ghost story should be, is fast-paced, cunningly constructed and supplied with an eerie final twist. And it deserves to be read far beyond the confines of university classics departments, because its theme is a universal one: the impulse that drives men to go to war."—Tom Holland, Sunday Telegraph "A classical scholar displays formidable scholarship . . . in this history of combat in the classical world from the Iliad to the fall of Rome. . . . Witty, erudite, and painstaking."—Publishers Weekly " Soldiers and Ghosts stimulates the reader and has many interesting insights. I particularly like the bibliographic notes pointing to further research."―Matthew Trundle, Ancient History "This book is doubly rewarding: specific historical detail, frequently linked to the prose and poetry of the era, ensure that readers get a high-level education in both military history and literature."—Peter Skinner, Foreword Magazine "Interesting food for thought regarding motivations for the ancient Greek and Roman soldiers and their commanders."—Steven E. Sidebotham, Journal of Military History "Soldiers & Ghosts is an excellent starting point for readers interested in the military histories of Greece and Rome."—Nicholas E. Efstathiou, Military History "The book provides an excellent survey of the military history of the Graeco-Roman world and the rise and fall of several empires."―New York Military Affairs Symposium Review "Lendon . . . has written a major reinterpretation of classical warfare. . . . A major and welcome addition to the literature."―Parameters " Soldiers and Ghosts, with its analysis of military combat in cultural terms, has much to recommend it. It is a lively and well-written book that is based on close readings of the classical sources and critical reviews of the secondary literature."―Barton C. Hacker, Technology and Culture "The book is a laudable attempt to bring the fruits of Lendon's scholarship to a much wider audience than the usual consumers of academic monographs."―Nathan Rosenstein, New England Classical Journal "J.E. Lendon offers an entertaining analysis of the evolution of ancient warfare in Soldiers and Ghosts."—Archaeology "Lendon situates battle firmly within its political, social, and economic environment. . . . The book is replete with insights, amply i

Warfare In The Classical World: An Illustrated Enc...

The Western Way Of War: Infantry Battle In Classic...

₱ 2,462.00
Pre-order Item
I confirm to purchase this pre-order item.
Other Choices
Return Policy
For more details please visit our page about Cancellations, Returns, and Refunds