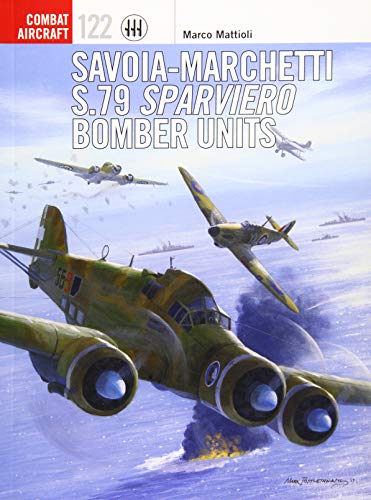 Product Description Italy's most successful wartime bomber, the S.79 was also the most produced, with around 1370 built between 1936 and early 1944. The Sparviero (Sparrowhawk) saw combat with the Regia Aeronautica in France, Yugoslavia, Greece, North Africa, East Africa and in the Mediterranean. Initially developed by Savoia-Marchetti as a transport, the aircraft had evolved into a dedicated medium bomber by the time the S.79-I made its combat debut with the Aviazione Legionaria in the Spanish Civil War in 1936. A robust bomber, the S.79 provided the striking power for most of Italy's aerial campaigns. A proven torpedo-bomber, the Sparviero also made a solid contribution to Italy's maritime war in the Mediterranean. Although initially hampered by poor tactics, the S.79 bomber crews nonetheless scored sunk a number of Allied vessels. Indeed, the Sparvieri bombers patrolled ceaselessly over the Mediterranean, providing a constant threat to Allied sailors in the early stages of the war. In East Africa and the Red Sea the Sparvieri were the most modern bombers in-theater, proving a challenge to RAF and SAAF biplane fighters. This proposed volume aims to chronicle the history of the S.79's war in the Mediterranean, North Africa, Greece, the Balkans and East Africa. S.79 bombers, in action from the first day of the war in the Mediterranean until late 1942, played their part in numerous actions, operating as both strategic and tactical bombers. From 1943 until war's end, the S.79 served as auxiliary and liaison transport aircraft. A small number continued to see action as bombers through to 1945, however, serving with the pro-German ANR in northern Italy. Review "If you are into Italian aircraft, the Spanish Civil War, or the Italian Air Force in World War II, this is a good reference book that is also a great read." - IPMS / USA "I have long sought a war history of the S.79 and find this to be a fine resource for Regia Aeronautica historians and modelers." - KitMaker Network "...good text and photos plus a series of really great color profiles. Four stars." - Air Classics Magazine About the Author A native of Rome, Marco Mattioli has been interested in military history since he was a teenager. In 1992 he joined the Italian National Journalist Order, after which he was employed as a writer for several leading Italian history publishers. A contributor to many important Italian history and defense magazines, as well as the author of a number of books on Italian military aviation, he wrote Osprey Aviation Elite Units 38 – 53° Stormo and Osprey Combat Aircraft 106 - Savoia-Marchetti S.79 Sparviero Torpedo-Bomber Units Richard Caruana is a Malta-based artist whose profile artwork is well known, and respected, in aviation modelling periodicals such as Scale Aviation Modelling and Scale Models. He has illustrated all of Osprey Aviation's Italian World War 2 titles.

Before
₱ 1,171.00
Pre-order Item
I confirm to purchase this pre-order item.
Other Choices
Return Policy
For more details please visit our page about Cancellations, Returns, and Refunds