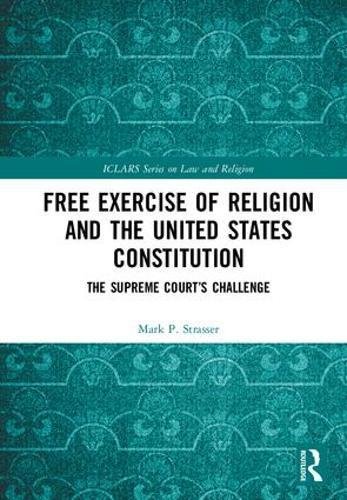 Free Exercise of Religion and the United States Constitution: The Supreme Court’s Challenge (ICLARS Series on Law and Religion)

About Free Exercise Of Religion And The United States

Product Description The United States is extremely diverse religiously and, not infrequently, individuals sincerely contend that they are unable to act in accord with law as a matter of conscience. The First Amendment to the United States Constitution protects the free exercise of religion and the United States Supreme Court has issued many decisions exploring the depth and breadth of those protections. This book addresses the Court’s free exercise jurisprudence, discussing what counts as religion and the protections that have been afforded to a variety of religious practices. Regrettably, the Court has not offered a principled and consistent account of which religious practices are protected or even how to decide whether a particular practice is protected, which has resulted in similar cases being treated dissimilarly. Further, the Court’s free exercise jurisprudence has been used to provide guidance in interpreting federal statutory protections, which is making matters even more chaotic. This book attempts to clarify what the Court has said in the hopes that it will contribute to the development of a more consistent and principled jurisprudence that respects the rights of the religious and the non-religious. Review 'Mark Strasser provides a fascinating and important analysis of the United States Supreme Court’s free exercise jurisprudence. He points out the Court’s failure to set and apply coherent standards, first under the Free Exercise Clause and later under RFRA. As a result, the lower courts have struggled to craft any sort of consistent doctrine under RFRA and under state RFRAs. Strasser explains that this works against accommodations for religious people and against those who oppose religious accommodation. This book is an important addition to the discussion of free exercise rights.' Frank S. Ravitch, Michigan State University College of Law, USA About the Author Mark Strasser is Trustees Professor of Law at Capital University Law School in Columbus, Ohio. His previous books include Religion, Education and the State: An Unprincipled Doctrine in Search of Moorings (2011), Same-Sex Unions Across the United States (2011), On Same-Sex Marriage, Civil Unions, and the Rule of Law: Constitutional Interpretation at the Crossroads (2002), The Challenge of Same-Sex Marriage: Federalist Principles and Constitutional Protections (1999), Legally Wed: Same-Sex Marriage and the Constitution (1997), Agency, Free Will, and Moral Responsibility (1992), The Moral Philosophy of John Stuart Mill: Toward Modifications of Contemporary Utilitarianism (1991), and Francis Hutcheson’s Moral Theory: Its Form and Utility (1990).

Europe, Globalization, And The Coming Of The Unive...

Political Theology: A Guide For The Perplexed (Gui...

Unholy: Why White Evangelicals Worship At The Alta...

Before
₱ 1,731.00
Pre-order Item
I confirm to purchase this pre-order item.
Other Choices
Return Policy
For more details please visit our page about Cancellations, Returns, and Refunds