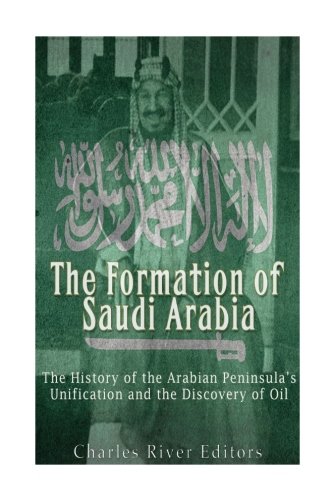 The Formation of Saudi Arabia: The History of the Arabian Peninsula's Unificatio

About The Formation Of Saudi Arabia: The History Of The

Product description *Includes pictures *Includes online resources and a bibliography for further reading At the conclusion of World War I, a once promised unified Arab state, which was to include the modern Hejaz, Syria, Lebanon, Palestine/Israel, Jordan and Iraq, did not materialize. Instead, the territories were divided between the French and British, but the British did reward the Hashemites by putting local leaders on the thrones of Iraq and Jordan. In 1924, when the revolutionary government of Mustafa Kemal Ataturk declared Turkey a secular state and abolished the Caliphate, the Sharif (now King) declared himself Caliph, and it appeared that a new Arab-based Caliphate centered on Mecca would emerge. However, this was also not to be, because the Saudis had reformed their power base in central Arabia. While the First Saudi state had been shattered in 1818 by Muhammad Ali Pasha, in 1824 another branch of the Saudi Clan had captured Riyadh, making it the capital of their more cautious Second Saudi State. Their growth had been slow for some time, but they took advantage of the crumbling Ottoman Empire to consolidate power and in 1925 attacked the Hejaz. With that, the Saudis stormed Mecca and drove out the Hashemite Clan. Like the Hashemites, the Saudi family consisted of Arabs, but the family came from the Nejd, an area of the Arabian Peninsula to the east closer to the Persian Gulf. In the late 18th century, the ambitious Muhammed bin Saud, the head of the family and the Sultan of Nejd, allied himself with a theologian named Muhammad ibn Abd al-Wahhab (1703-1792). Wahhab taught that Islam's weakened position (compared to the rising Christian powers of his era) was due to an internal weakness within the Islamic community. He taught that increasing numbers of Muslims had turned their backs on the teachings of the Prophet and had corrupted Islam with pagan influences. He was particularly scornful of Shi’a Islam or any practices that he did not see directly referenced within the Qur’an, and he sought to "purify" the religion and return it to its "fundamentals." Thus, Wahhabism is a form of fundamentalism that desires a return to the imagined purity of the past and a willingness to undertake dramatic steps to achieve it. As the process of consolidating the new Saudi state was still in progress, the course of Saudi Arabia’s history changed with the discovery of oil, and today it is almost impossible to imagine Saudi Arabia without the vital resource. Not only does the country have 18 percent of the world’s proven oil reserves and lead the world in exports, but in mid-2016, the International Energy Agency (IEA) reported that Saudi Arabia had overtaken the U.S. to become the world’s largest oil producer. There was, however, a time when the country’s finances were anything but stable and when three ministries were the extent of the government’s formal institutions. This was not, in fact, so long ago either, as the modern state of Saudi Arabia is still a relatively young country, formally announced only in 1932. At that time, finances were precarious; its major sources of income were Muslim pilgrimage, including the hajj, the annual pilgrimage to Mecca and Medina; customs and taxes; and international aid and loans. These were also all dependent on the current international situation and the interests of foreign parties. An economic downturn, for example, depressed the number of pilgrims, while shifting interests of international parties could cause support to dry up with little notice. The Formation of Saudi Arabia: The History of the Arabian Peninsula’s Unification and the Discovery of Oil traces the formation of the modern Saudi state, beginning with its 18th and 19th century predecessors, as well as the various efforts undertaken by its founders to nation build and secure the Saudi family’s position of power.

ARAMCO: Above The Oil Fields

The Land Of Frankincense: The Guide To The History...

The Wages Of Oil: Parliaments And Economic Develop...

Into The Hands Of The Soldiers: Freedom And Chaos ...

Prisoner In Al-Khobar: A True Story About The Life...

Before
₱ 660.00
Pre-order Item
I confirm to purchase this pre-order item.
Other Choices
Return Policy
For more details please visit our page about Cancellations, Returns, and Refunds