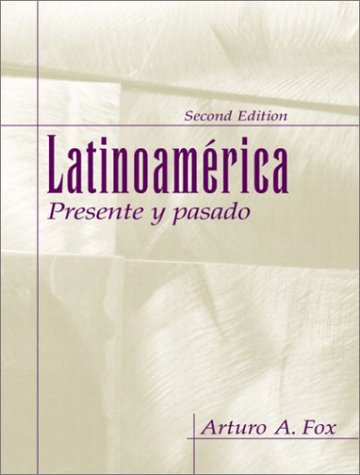 Product description For undergraduate-level Spanish language courses at the advanced intermediate level; also ideal for use in surveys of Latin American culture taught in Spanish. Offering a well-organized overview of Latin America's development from pre-Columbian times to the present, this cultural reader is written in straightforward, accessible Spanish depending heavily on cognates without compromising the natural flow of native speaker discourse. Containing all the basic information necessary for a thorough survey course on Latin American culture and civilization, it maintains the quality of a pleasurable narrative throughout, presenting descriptive and fascinating data to support and illustrate the presence of historical and cultural trends and structures. Review "My overall reaction is positive. It is an easy book to teach from, in that it follows a chronological chain of events and touches on the most salient events of Latin American history!"  Giorgio Perissinotto, University of California, Santa Barbara "I am pleased to see that Fox has broken with the country-by-country approach and has organized the book in terms of areas that are likely to be of principal interest to American students."  David William Foster, Arizona State University From the Back Cover Latinoamérica: presente y pasado, Second Edition, introduces students to the cultures and history of Latin America from pre-Colombian times to the present. Written in an easy-flowing, narrative style, this new edition continues to offer an extensive yet tangible view of Latin American history. Furthermore, Latinoamérica examines the Hispanic experience not only in Latin America, but also in the United States, a topic of increasing relevance and interest in the States. What's New? The second edition of Latinoamérica has been updated to include the latest political and economic developments in Latin America. The first three chapters have been rearranged to follow a clear chronological order. The scope of the text has been expanded to include greater coverage of countries from the Andean region, Central America, the southern cone, and the Caribbean. Latinoamérica en la red, a new reference section, lists and describes Web sites where additional inform anon on Latin American culture and history can be found. Features A basic chronology and chapter summary at the beginning of each chapter prepares students for the material that follows. Each chapter's Notas section contains supplemental information and terminology for further study. Varied activities test vocabulary and comprehension and prompt students to otter their m\ 11 analysis of and opinion on the chapter's themes. An extensive bibliography allows for more in-depth exploration of chapter topics. Excerpt. © Reprinted by permission. All rights reserved. This second edition of Latinoamérica: presente y pasado intends to fulfill two primary objectives: to bring the material of the first edition up to date, especially with regards to recent political and economic developments in specific Latin American countries, and to introduce several changes in the coverage that I hope will be welcomed by both instructors and students; some of these changes have been suggested by faculty who are using the first edition. I have changed the order of the first three chapters in order to follow a more strict chronological sequence. In an effort to offer a more comprehensive review of the main cultural areas of Latin America, this second edition expands the coverage to include the Hispanic countries of the Caribbean and Central America, the Andean region, and the southern cone. This has been accomplished by partially reducing the coverage of Mexico, Argentina, and Cuba, thus adopting a regional approach without increasing the length of the chapters, and by dropping the chapter on U.S.-Latin American relations. The role of the United States in Latin American affairs, however, is still brought up in the context of

Excavations At Xunantunich And Pomona, Belize, In ...

Paisanos: The Forgotten Irish Who Changed The Face...

Roads: An Anthropology Of Infrastructure And Exper...

₱ 2,396.00
Pre-order Item
I confirm to purchase this pre-order item.
Other Choices
Return Policy
For more details please visit our page about Cancellations, Returns, and Refunds