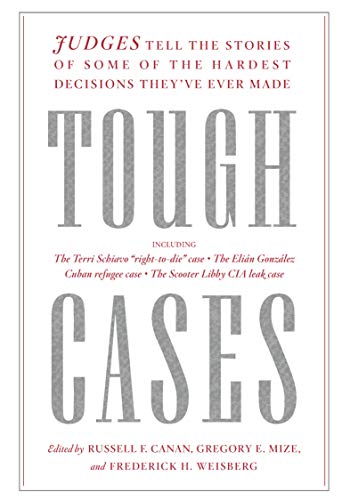 Tough Cases: Judges Tell the Stories of Some of the Hardest Decisions They’ve Ever Made

About Tough Cases: Judges Tell The Stories Of Some Of The Hardest Decisions They’ve Ever Made

Product description Tough Cases stands out as a genuine revelation. . . . Our most distinguished judges should follow the lead of this groundbreaking volume.”Justin Driver, The Washington PostA rare and illuminating view of how judges decide dramatic legal cases—Law and Order from behind the bench—including the Elián González, Terri Schiavo, and Scooter Libby cases Prosecutors and defense attorneys have it easy—all they have to do is to present the evidence and make arguments. It’s the judges who have the heavy lift: they are the ones who have to make the ultimate decisions, many of which have profound consequences on the lives of the people standing in front of them. In Tough Cases, judges from different kinds of courts in different parts of the country write about the case that proved most difficult for them to decide. Some of these cases received international attention: the Elián González case in which Judge Jennifer Bailey had to decide whether to return a seven-year-old boy to his father in Cuba after his mother drowned trying to bring the child to the United States, or the Terri Schiavo case in which Judge George Greer had to decide whether to withdraw life support from a woman in a vegetative state over the wishes of her parents, or the Scooter Libby case about appropriate consequences for revealing the name of a CIA agent. Others are less well-known but equally fascinating: a judge on a Native American court trying to balance U.S. law with tribal law, a young Korean American former defense attorney struggling to adapt to her new responsibilities on the other side of the bench, and the difficult decisions faced by a judge tasked with assessing the mental health of a woman who has killed her own children. Relatively few judges have publicly shared the thought processes behind their decision making. Tough Cases makes for fascinating reading for everyone from armchair attorneys and fans of Law and Order to those actively involved in the legal profession who want insight into the people judging their work. Review Praise for Tough Cases:  Tough Cases . . . provides an invaluable public service, as the judicial branch is perpetually shrouded in mystery. Even more important, though, several judges go further by shedding the self-serving, wholly unrealistic pretense that legal interpretation never confronts shades of gray.”  Justin Driver, The Washington Post Engaging and bracingly honest essays. . . . The editors of Tough Cases chose well to find judges of heart and skill, bringing their stories to light.”  National Catholic Reporter Unique and hard-to-put-down title for anyone interested in America’s judicial system. Highly recommended for all libraries.”  Library Journal (starred review) An unprecedented view from the bench of compelling stories told by trial judges as they grapple with the most fundamental questions in life and the law. The honesty, compassion, frustration, angst, and indeed courage of these judges shine through.”  Greta van Sustren, journalist and former criminal defense attorney  Tough Cases brings readers the closest they will come to putting on judicial robes and making the demanding decisions that change the course of people’s lives.”  Judge Jonathan Lippman, former chief judge of the New York Court of Appeals  Tough Cases is a powerful collection of inside information about some of the most interesting and high-proﬁle cases of our times. As riveting as a courtroom drama, it is essential reading for lawyers, law students, and all concerned about justice in America.”  Paul Butler, author of Chokehold Hard cases may or may not make bad law, but they certainly make for riveting reading. A cannot-put-down book by some of our most thoughtful jurists.”  Louis Michael Seidman, Carmack Waterhouse Professor of Constitutional Law, Georgetown University Law Center Candid reﬂections of judges who were there. From family cases to tribal courts, constitutional questions to murder, Tough Cases takes the reader inside the courtroom and into the judge’s chamber.”  Mary McQueen, president, National Center for State Courts About the Author Russell Canan is currently a judge on the Superior Court of the District of Columbia and an adjunct professor at the George Washington University School of Law. He lives in Washington, DC. Frederick Weisberg is currently a judge on the Superior Court of the District of Columbia and teaches annually in the Trial Advocacy Workshop at Harvard Law School. He lives in Washington, DC. Gregory E. Mize is a currently a judge on the Superior Court of the District of Columbia and is a judicial fellow at the National Center for State Courts and an adjunct professor at the Georgetown University Law Center. He lives in Washington, DC.