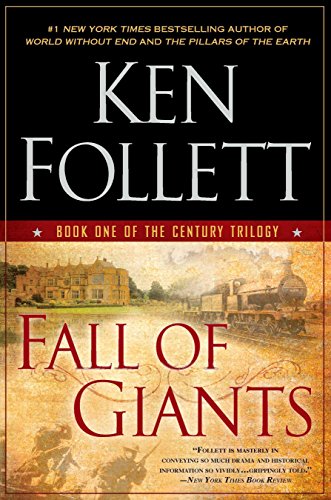 Fall of Giants: Book One of the Century Trilogy

Fall of Giants: Book One of the Century Trilogy Features

About Fall Of Giants: Book One Of The Century Trilogy

Product Description Ken Follett’s magnificent new historical epic begins as five interrelated families move through the momentous dramas of the First World War, the Russian Revolution, and the struggle for women’s suffrage.  A thirteen-year-old Welsh boy enters a man’s world in the mining pits. . . . An American law student rejected in love finds a surprising new career in Woodrow Wilson’s White House. . . . A housekeeper for the aristocratic Fitzherberts takes a fateful step above her station, while Lady Maud Fitzherbert herself crosses deep into forbidden territory when she falls in love with a German spy. . . . And two orphaned Russian brothers embark on radically different paths when their plan to emigrate to America falls afoul of war, conscription, and revolution.  From the dirt and danger of a coal mine to the glittering chandeliers of a palace, from the corridors of power to the bedrooms of the mighty,  Fall of Giants takes us into the inextricably entangled fates of five families—and into a century that we thought we knew, but that now will never seem the same again. . . .  Look out for Ken's newest book, A Column of Fire, available now. Review Praise for Fall of Giants "Follett is masterly in conveying so much drama and historical information so vividly . . . grippingly told." — The New York Times Book Review"Follett conjures the winds of war." — The Washington Post "A good read. . . . It's a book that will suck you in, consume you for days or weeks . . . then let you out the other side both entertained  and educated. That's quite the feat." — USA Today "Grand in scope, scale, and story." —The Associated Press "Follett entwines fiction and factual events well. . . . This is a dark novel, motivated by an unsparing view of human nature and a clear-eyed scrutiny of an ideal peace. It is not the least of Follett's feats that the reader finishes this near thousand-page book intrigued and wanting more." — Chicago Sun-Times "Fascinating, in a big way." — St. Louis Post-Dispatch " Fall of Giants is a book for you to savor, one in which you can lose yourself for hours on end. It is a big book that tells a big story, but it is one you will not want to end." — The Huffington Post  "Follett once again creates a world at once familiar and fantastic. . . . A guiltless pleasure, the book is impossible to put down. . . . Empires fall. Heroes rise. Love conquers. After going through a war with these characters, you're left hoping that Follett gets moving with the next giant installment." —Time Out New York "A suspenseful epic." —The Seattle Times"Tantalizing." —Newsday About the Author Ken Follett is one of the world’s best-loved authors, selling more than 160 million copies of his thirty books. Follett’s first bestseller was  Eye of the Needle, a spy story set in the Second World War.  In 1989  The Pillars of the Earth was published, and has since become the author’s most successful novel. It reached number one on bestseller lists around the world and was an Oprah’s Book Club pick.   Its sequels,  World Without End and  A Column of Fire, proved equally popular, and the Kingsbridge series has sold 38 million copies worldwide.   Follett lives in Hertfordshire, England, with his wife Barbara. Between them they have five children, six grandchildren, and three Labradors. Excerpt. © Reprinted by permission. All rights reserved. CHAPTER TWO January 1914 Earl Fitzherbert, age twenty-eight, known to his family and friends as Fitz, was the ninth-richest man in Britain. He had done nothing to earn his huge income. He had simply inherited thousands of acres of land in Wales and Yorkshire. The farms made little money, but there was coal beneath them, and by licensing mineral rights Fitz’s grandfather had become enormously wealthy. Clearly God intended the Fitzherberts to rule over their fellow men, and to live in appropriate style; but Fitz felt he had not done much to justify God’s faith in him. His father, the previo

The Japanese Lover: A Novel

The Land Of Painted Caves: A Novel (Earth's Childr...

Before
₱ 916.00
Pre-order Item
I confirm to purchase this pre-order item.
Other Choices
Return Policy
For more details please visit our page about Cancellations, Returns, and Refunds