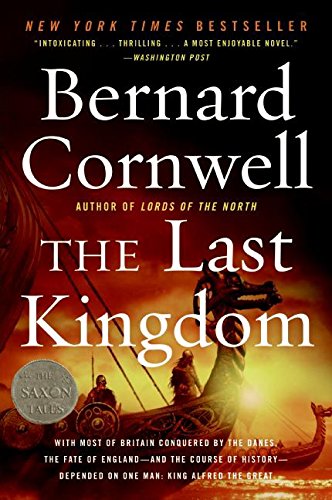 About The Last Kingdom

Product Description The first installment of Bernard Cornwell’s New York Times bestselling series chronicling the epic saga of the making of England, “like Game of Thrones, but real” (The Observer, London)—the basis for The Last Kingdom, the hit Netflix series. In the middle years of the ninth century, the fierce Danes stormed onto British soil, hungry for spoils and conquest. Kingdom after kingdom fell to the ruthless invaders until but one realm remained. And suddenly the fate of all England—and the course of history—depended upon one man, one king. From New York Times bestselling storyteller Bernard Cornwell comes a rousing epic adventure of courage, treachery, duty, devotion, majesty, love, and battle as seen through the eyes of a young warrior who straddled two worlds. Review “Intoxicating….Thrilling….Cornwell conveys the disquiet of change and the melancholy of extinction as few historical novelists manage to.” ( Washington Post Book World) “Enter Cornwell’s vividly drawn ninth-century Kingdom … after this dip into the Dark Ages, we want to go back.” (Entertainment Weekly) “Enthralling ... the desperate, heroic struggle of Alfred “the Great” ... against the seemingly invincible Vikings. (Wall Street Journal) “History comes alive.” (Boston Globe) “A crackling good storyteller.” (Publishers Weekly) “Cornwell .... makes the usually gloomy ninth century sound like a hell of a lot of fun.” (Kirkus Reviews) “Highly recommended … another great historical series in the making.” (Library Journal (starred review)) “Masterful....[An]irresistible epic adventure....Cornwell deserves praise for his mesmerizing narrative finesse and his authentic historical detailing.” (Booklist) From the Back Cover The first installment of Bernard Cornwell’s bestselling series chronicling the epic saga of the making of England, “like Game of Thrones, but real” (The Observer, London)—the basis for The Last Kingdom, the hit BBC America television series. This is the exciting—yet little known—story of the making of England in the 9th and 10th centuries, the years in which King Alfred the Great, his son and grandson defeated the Danish Vikings who had invaded and occupied three of England’s four kingdoms. The story is seen through the eyes of Uhtred, a dispossessed nobleman, who is captured as a child by the Danes and then raised by them so that, by the time the Northmen begin their assault on Wessex (Alfred’s kingdom and the last territory in English hands) Uhtred almost thinks of himself as a Dane. He certainly has no love for Alfred, whom he considers a pious weakling and no match for Viking savagery, yet when Alfred unexpectedly defeats the Danes and the Danes themselves turn on Uhtred, he is finally forced to choose sides. By now he is a young man, in love, trained to fight and ready to take his place in the dreaded shield wall. Above all, though, he wishes to recover his father’s land, the enchanting fort of Bebbanburg by the wild northern sea. This thrilling adventure—based on existing records of Bernard Cornwell’s ancestors—depicts a time when law and order were ripped violently apart by a pagan assault on Christian England, an assault that came very close to destroying England. About the Author BERNARD CORNWELL is the author of the acclaimed New York Times bestselling Saxon Tales series, which includes The Last Kingdom, The Pale Horseman, Lords of the North, Sword Song, The Burning Land, Death of Kings, The Pagan Lord, and, most recently, The Empty Throne and Warriors of the Storm, and which serves as the basis for the hit television series The Last Kingdom. He lives with his wife on Cape Cod and in Charleston, South Carolina.

Lords Of The North

Before
₱ 1,232.00
Pre-order Item
I confirm to purchase this pre-order item.
Other Choices
Return Policy
For more details please visit our page about Cancellations, Returns, and Refunds