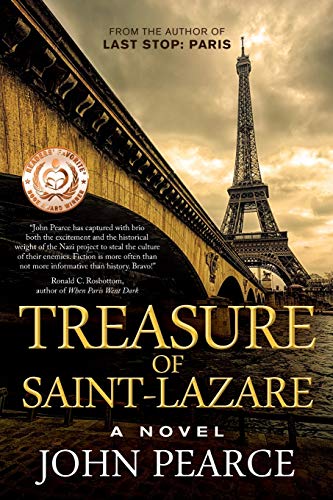 See more product information!
-
Save 19%
Before
₱ 1,217
Price Tracker
*Used item/s available. *Price and Stocks may change without prior notice
Pay with

About Treasure Of Saint-Lazare

Product Description A hidden treasure. A murderous plot. A love that won't let go. BEST HISTORICAL MYSTERY OF THE YEAR (Readers Favorite) His long-ago lover brings a cryptic letter to Paris, pulling Eddie Grant into a gripping wartime web of love and death. The letter provides one slim chance to find the terrorists who murdered his family seven years before. And to find a priceless treasure. The letter sparks a danger-filled quest across Paris, the Loire Valley, and the gleaming beaches of the Florida Gulf Coast for the most valuable Nazi loot still missing, a famous Raphael self-portrait from the early 16th century. The painting and the crates of bullion that accompanied it were intended to finance the Fourth Reich, or so the rumors said. Jen Wetzmuller, daughter of his late father's World War II colleague in American Army intelligence, found the letter after her father was run down by a car in the streets of Sarasota. For Eddie, it brings the long-cold case of his family's murder back to life. Its clues propel him from his Paris home to Florida, where he barely escapes with his life. Then it's back home, to burrow into the darkest reaches of the German occupation. Along the way, he and Jen restart the brief, fiercely passionate affair that he abandoned, to his regret, 20 years before. Most of all, Treasure of Saint-Lazare is a novel of Paris. (The painting, Raphael's famous Portrait of a Young Man, remains missing Other treasures Hans Frank stole were recovered when American troops arrested him near Munich, but not the Raphael. He was one of eleven Nazi war criminals hanged at Nuremburg.) "Bravo!" (Ronald Rosbottom, author of When Paris Went Dark) "An exceptionally well written book with a fast-paced story line and many plot surprises." Review "Face-paced thriller spanning the globe  from Paris to the states, The Treasure of Saint-Lazare takes off with the hit and run murder of a former partner of Eddie Grant's father. The two men were Monument Men, American soldiers who attempted to recover stolen artwork from the Nazi's. Eddie and Jen, his former flame investigate the crime discovering it may be linked to a tragedy in Eddie's family from years ago. Reminiscent of Steve Berry's The Amber Room, Pearce takes the reader on an action-packed journey from Paris's glittering streets to Florida's Sarasota, the scene of the crime, searching for answers for the stolen artwork. A nice blend of history, art, and action." (Carole Roman, author of Navigating Indieworld) I knew two of the Monuments Men , and their stories fascinated me. John Pearce has captured with brio both the excitement and the historical weight of the Nazi project to steal the culture of their enemies. Fiction is more often than not more informative than history. Bravo! (Ronald Rosbottom, author of When Paris Went Dark) Reviewed by Sharon Fawley for Readers' Favorite "Treasure of Saint-Lazare", by John Pearce, is a mystery about events far distant in time and space that profoundly affect the peaceful life of a wealthy American businessman living in Paris. ... Pearce weaves richly textured descriptions of life in Paris through an intricate plot with believable, well-drawn characters. Overall, this is a satisfying mystery, a surprising love story, and an up close look into the dark days of Europe as WWII drew to a close. A new review from Goodreads "What an absorbing story! John Pearce's book has everything: a fascinating historical backstory, suspenseful twists and turns, and evocative descriptions of both characters and places. The book has obviously been meticulously researched, with the action divided mostly between Pearce's hometown, Sarasota, and what is obviously his spiritual home, Paris. A great read, highly recommended." From the Author Treasure of Saint-Lazare has its roots in my love of Paris and my experiences over the years as a journalist in Europe and Washington, followed by a career in business. Some of its

The Things They Carried

Harvester Of Hope: Learning To Live

Girl At War: A Novel

Before
₱ 743.00
Pre-order Item
I confirm to purchase this pre-order item.
Other Choices
Return Policy
For more details please visit our page about Cancellations, Returns, and Refunds